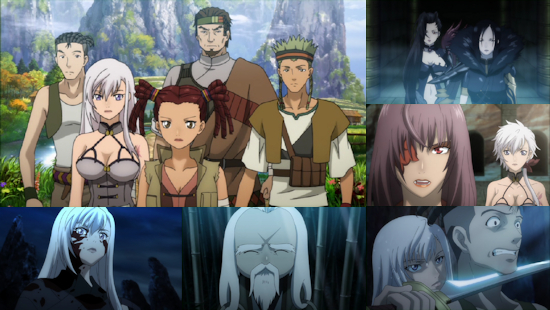 They say that revenge is a dish best served cold, and they don't get much colder than the protagonist of Blade & Soul, Alka - here is a woman who is not only incredibly efficient and slicing and dicing her opponents, she is also capable of doing so without the slightest of emotional reactions to the deadly carnage she creates. As a highly trained assassin she is without compare, but surprisingly this seemingly emotionless woman has been launched down a path of vengeance due to the murder of the master who trained and raised her - a path which puts her into direct conflict with the land's most powerful force.

That force is the Palam Empire, who as you might expect have lots of power and money at their disposal and aren't afraid to use it, buying up prime land or simply taking it for themselves if the residents refuse, and using less than legitimate (and indeed downright supernatural) means to create some extremely powerful and dangerously lackeys for them to use as required. Unfortunately, it's this empire whose ire has been roused by Alka, as her thirst for revenge quickly pits her against Palam, making her a wanted woman.

This leaves Alka moving from place to place and person to person, trying to make ends meet by working for various individuals while also trying to steer clear of showing off the butterfly mark on her shoulder which will tip those around her off as to her wanted status - something which is easier said than done, particularly when your clothing choices aren't the most conservative you're ever likely to find.

The constantly shifting sands of Alka's location and situation makes much of this series an episodic affair with a broad theme of revenge running through it - a potentially interesting setup, made more promising by the fact that the series actually does a pretty good job of building its world from the show's Korean MMORG roots into a fleshed out land that feels believable. Unfortunately, the show quickly starts to crumble beyond this point - the series ends up serving as a succession of stories where characters who aren't very interesting meet Alka, help her in some way and then die, usually as a result of either Alka's thirst for revenge of their own. Thematically it all fits together, but there's never enough time or focus given to any character to make you care about their fate beyond a brief "oh dear" before you move on to the next instalment which rinses and repeats the process. The same can be said for the Palam Empire - we're told over and over about how terrible they are, but in a world where everyone seems to be at one another's throats at knifepoint most of the time they don't often seem all that more terrible for the most part and so much of their threat as an entity falls flat.

In essence then, the way Blade & Soul serves up its core theme is the issue - it simply doesn't have the narrative chops to really dig deep on what brings forth a strong desire for revenge, and doesn't have the patience to really pick apart the spiral of destruction that ensues from it. There are some bright moments that blossom from out of its stories, but they're too few and far between to have any real impact when the series is taken as a whole.

The show also has issues elsewhere - from a visual perspective Blade & Soul starts out promisingly with strong character designs (beyond those inevitable questions as to some of the wardrobe choices of female fighters) and a strong aesthetic, but as the episodes rack up so the animation quality begins to fall apart noticeably. Things do improve for a few of the show's set piece moments, but they're offset by other occasions which inadvertently make key action scenes into moments of comedy, and by the end of the series characters are leaping around like the cardboard cut-outs of Ninja Slayer (without the sense of self-deprecation) and spiralling off-model in almost every shot. Again, the story of Blade & Soul is the same - early promise that seems to collapse under the weight of its potential.

As a subtitle-only release, there's no English dub to discuss here, but the show's Japanese audio is pretty decent albeit lacking in any outstanding voice performances, and all subtitles are present and correct. As an NTSC DVD release (which is also available on Blu-ray), there are no PAL conversion issues to worry about here, and with the show spread over three DVDs there's enough breathing room in terms of bitrate to ensure that even this edition of the series looks pretty good.

There really isn't too much that we can find to say about Blade & Soul - it certainly has plenty of blades, but what it really lacks is any kind of soul. There are plenty of individual and broader stories throughout this series, but none of them have any emotional or dramatic impact - no wonder that Alka seems so apathetic for most of the series, given how inconsequential so much of what she's engaged in seems to be. With a well-crafted world and a theme rich with potential, this series should have achieved so much more, but come the end of it all it's forgettable in every way.