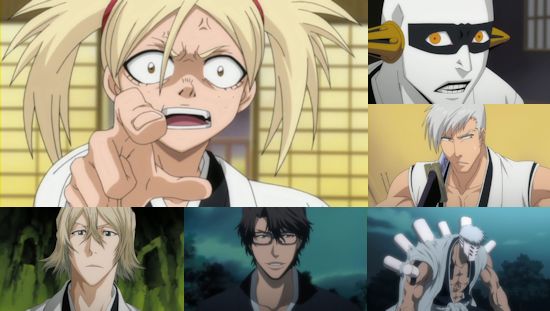 After dispensing with its filler, the first half of Bleach's tenth series finally brought us back to the crux of its story as it ramped up the stakes and the personnel involved in Orihime's rescue from Aizen's clutches - and in widescreen no less!

To begin however, a word of warning - this isn't so much "series ten, part two" as "a bit of series ten, then onwards to series eleven". As a result, once again Bleach proves to be something of a tease as it brings us the bombastic climax of Kenchiki's battle with the Espada known as Nnoitora, throws in another big, fat plot twist and then leaves us hanging as it wanders off to pursue other avenues, by which I mean that it's filler time again!

To toss us unashamedly into this realm of lowered expectations things really couldn't be any worse, as not only are we reintroduced to star of previous filler arc Rurichiyo and her loyal bodyguards, but we're also put through a tortuous two-episode arc surrounding her determination to organise a football-like game called kemari. Is this the worst thing that Bleach has ever delivered to our TV screens? Why yes, yes it is, and by some considerable distance.

Assuming that you haven't completely lost the will to live by the end of those two episodes (seriously, I recommend keeping all sharp objects out of reach while watching them) then things get markedly better for the remainder of this volume as we tangentially return to the original manga's content via a side-story that has a semblance of relevance to the main, on-going story within the series. Specifically, we journey back 100 years in Soul Society's history to a pivotal time within its organisation, as we're granted a window through which to view Uruhara's journey to squad captaincy, and his fall from grace in the light of some of the early signs of Aizen's nefarious plans; plans which also bring the group that is now known as the Visored into the picture.

As jarring as it is to be torn out of the midst of a vitally important story arc at a pivotal point yet again by this series, and in spite of those two dire episodes which left me fearing for what was to come (not to mention my sanity), the remainder of the episodes on these discs at least tackle what arcs of this nature should really be about - not random meanderings or nonsense, but filling in some of the gaps in the show's universe to make the series a more satisfying whole. Admittedly, the attempts of this particular arc to plug some of those gaps isn't perfect - at times it feels clumsy and at others it's ill-fitting, but it makes for an ultimately satisfying acknowledgment of part of the world that has previously not been fully fleshed out before we return to matters proper in season twelve. No, I mean season eleven. Or twelve. I'm just not sure any more... damn you confusing DVD release nomenclature!

Anyhow, confusing numbering aside I have to give a certain amount of credit to the episodes contained within these discs for defying my original feeling of disappointment, and for making up for a pair of awful episodes with something far more interesting. No matter how frustrating it is to have another distraction from the Arrancar story in its midst, those frustrations are matched by an interest in an arc that actually puts its mind towards filling in some important gaps within Bleach's wider narrative.

English and Japanese stereo audio with English subtitles.  The only extras here are the traditional clean opening and ending credits, complete with karaoke subtitles.

7
Ignoring the worst two episodes of Bleach ever that are contained within these discs, at least this latest move away from the story proper exhibited here contains some worthwhile material.
COMMENT AND DISCUSS
blog comments powered by Disqus