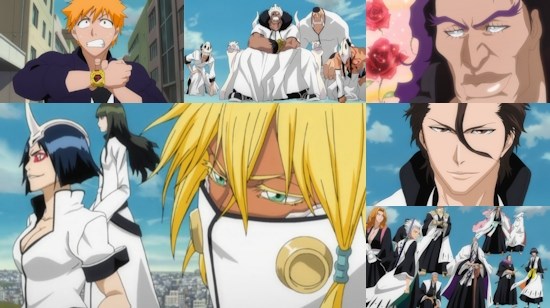 Thanks to the strange way in which its original Japanese television broadcast was apportioned into seasons to accomodate some short bursts of direct manga adaptation in the midst of filler episodes, the link between that breakdown and the series labelling for Bleach's UK releases has become rather tenous of late - a scenario which has also led to series 11 (as we're calling it over here) being released immediately as a complete series collection rather than across two parts as has been the normal tradition.

That footnote aside, let's get the bad news about the bundle of episodes spread across these four DVDs out of the way first - some decent material is book-ended by some more of the worst garbage that Bleach has ever offered up out of its desperate need to provide an episode for television broadcast each week. Whether it's a lazy attempt to spoof Super Sentai series or the obligatory beach episode (I would give kudos to Bleach for taking this long to get the cast into swimsuits, but the episode is awful), these brief side stories are not only stupid but also completely irrelevant in terms of providing any interesting extension to the Bleach universe.

Thankfully, we're only "treated" to five of these filler episodes that actually serve as the mouldy bread to some rather tasty contents inside which returns us to the real story at hand within Bleach - the revelation and execution of Aizen's ultimate plan to destroy Soul Society as he seeks to create the Ouken. Although Soul Society's finest have hatched a plan to move Karakura Town, an important part of this process, out of harm's way, that still isn't enough to prevent a major conflict from occurring between various high-ranking Soul Reapers and the Arrancar as the latter are tasked with obliterating Karakura Town. In the midst of all this of course, there's still the small matter of Orihime's fate, although Ichigo's continued attempts to affect a rescue very much take a back seat to other events here.

Essentially, what this boils down to is a whole lot of action for the majority of the episodes on show here, with plenty of different clashes to work through. All of these battles are resolved in short order and without too much of the back and forth banter and the like which so often threatens to slow series like this to a glacial pace, leaving us with a satisfying chunk of enjoyable action. Admittedly the Arrancar in terms of character designs and abilities aren't the most exciting opponents we've ever seen in the series, but they still offer enough to keep things fresh and exciting enough, and to be honest it's really our heroes that we care about over and above any cannon fodder placed in their path.

In more general terms, these four DVDs are certainly good enough in terms of presentation - they're free of extras to speak of but contain all of the relevant episodes in their entirety (including any post-credit vignettes). Both language tracks are effective at delivering everything required to them, although conversely video quality seems to suffer when there's fast moving action on-screen in a notable way that we don't see all that often on DVD, suggesting that video bitrates aren't the best, but it isn't quite bad enough to detract from what's going on.

If you've been following Bleach religiously to this point, then there's little doubt that you'll enjoy much of what is presented here - it feels like it's been a while since we've seen so much frenetic action featuring such a large roster of characters, and its presence here is most welcome. It's just a shame that this unbridled joy is tempered by the handful of episodes which surrounds this series as a whole, serving as a reminder of what a slog this series can be to watch when it isn't dealing with what it does best while offering up its directly adapted narrative from the manga.

7
A few episodes of terrible filler material is offset by plenty of enjoyable and surprisingly fast-paced action from the show's main storyline.
LATEST REVIEWS