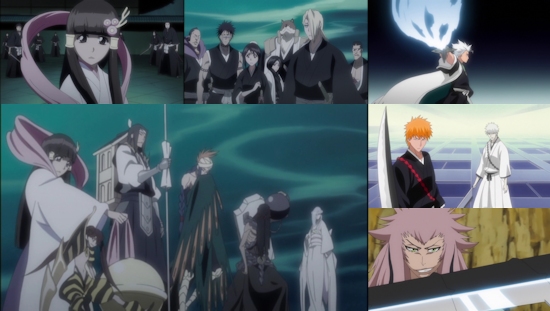 Another new series of Bleach means that we move away from the show's main storyline once again - but before you run away crying tears of despair you might want to stick around and see exactly what this filler arc has to offer...

Rather than delving into dumb comedy or some pointless side-story, this twelfth season of Bleach instead weaves a unique narrative using an arguably neglected aspect of its mythos - the Soul Reapers' swords, or "zanpakuto". While we've met a few of the characters that reside within these swords, this story allows us to meet a whole lot more of them, as some strange behaviour soon reveals itself to be the starting point of a terrifying prospect for Soul Society - a full-on zanpakuto rebellion.

With all of the beings that imbue the Soul Reapers with their power not only going on strike but actively seeking to rebel against and even destroy their owners in the name of freedom, there's no easy path ahead for Soul Society as their finest find themselves shorn of many of their abilities while also questioning why their once-loyal companions have now deserted them.

The answer to this second question can be found in an individual named Muramasa, who seems to have masterminded this plan - but how can he be stopped? As you might expect, all eyes turn to Ichigo Kurosaki, who seems to have been unaffected by the unfolding chaos back in the human realm, but once he joins the battle in Soul Society even he finds himself having to pace his zanpakuto; an event which seems to be one of the major goals in Muramasa's plan as it gains traction to the point where even a normally loyal Soul Reaper seems prepared to defect...

Although this side story ultimately suffers from the same issues as any other Bleach filler arc - namely that you know it'll have to press the "reset" button at some point to return to the main story - one of the strengths of the episodes on show here is that it doesn't feel like it's inconsequential. By tackling a subject at the heart of Soul Society's world, there's a satisfying sense of weight and importance to events here to ensure that you remain invested in its narrative and unfolding events.

This story arc also seems to be having a lot of fun with using its zanpakuto as living, breathing characters, firstly in terms of character design (many of which are great) but also in terms of personality as it pits these individuals against their former owners to great effect. This also leads us towards some of the best action scenes we've seen from Bleach in quite some time as underpowered Soul Reapers have to face off against the familiar abilities of their new enemies, and proves to be exactly the kind of shake-up that a series like this needs from time to time.

Whether this story arc has the legs to remain this entertaining from beginning to end is another question entirely of course, and only time will tell as to how it manages to progress and eventually conclude this story arc and whether it'll be a satisfying resolution, but for now this feels like exactly the kind of thing that Bleach does best, carving out a construct that allows for plenty of action from a neat and engaging construct.

In terms of this DVD release, everything you would expect is here - it looks decent enough, sports a solid English dub that never quite lives up to its Japanese counterpart, and hosts problem-free subtitles (with the exception of at least one on-screen text subtitle we spotted which was missing) and no particularly exciting extras to speak of (although the wonderful ending credits are deserving of a text-free version).

If you're the kind of person that rolls your eyes every time Bleach diverges from its main story to head off on a flight of fancy (which we most certainly do, for the record), then you might want to hold fire on any excessive eye movements for the time being at least - judged on these two discs, series twelve of Bleach could actually offer up some excellent material, and dare we say it's even a little more vibrant and exciting than its main storyline given how long that's dragged on in places. Some rare praise from us for this kind of material, but deserved praise in our opinion provided it can carry this through into future volumes successfully.

8
Yes, it's a filler arc. Yes, it's really rather good. No, we haven't lost our minds. Yet.
COMMENT AND DISCUSS
blog comments powered by Disqus