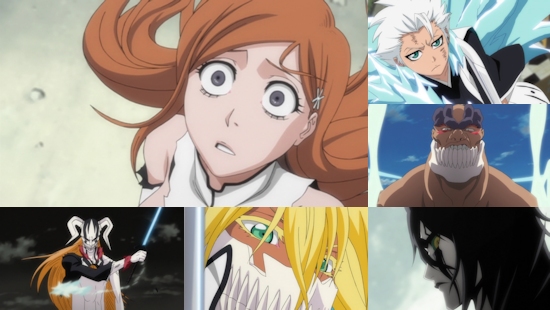 After offering us a surprisingly accomplished filler arc for series twelve, we get back to the real deal for Bleach's thirteenth season, as we return to Karakura Town (or rather, a fake approximation of it) to see some of Soul Society's finest take on Aizen's collection of Espada.

It's this variety of pitched battles between the ever-dwindling number of Espada and Soul Reapers that takes up much of the focus for the episodes on show here, with Hitsugaya's pitched battle in particular taking up plenty of the volume's running time. Much of this feels like mere window dressing compared to the real main course however, that being Ichigo's ever-more insistent efforts to save Orihime which sees him butting heads with Ulquiorra in a major fashion. Does this stern test of his abilities mean that it might be the end of the road for our protagonist? Of course this is Bleach, so not quite, but it does provide some striking moments in the midst of this volume that proves to be its peak overall.

Along those lines, it's rather a shame that there isn't more on these three DVDs that manage to match the majesty of the climax of Ichigo and Ulquiorra's battle as it provides some of the best moments to come out of Bleach in a long, long time - there's an intensity to its delivery and pacing that occurs far too rarely in the show at this point, and its presentation in terms of animation and colour palette only adds to that intensity, particularly in the way events revolve around Orihime and the increasingly distressing position in which she finds herself. If you're a Bleach fan, the first episode on disc two of this release alone is must-watch, stupendous stuff.

Given the quality of some of that content, it's perhaps a little harsh to be too negative about the rest of this volume, as it's not bad by any stretch of the imagination - instead, the rest of the story presented here is very much typical fare, with slow and verbose battles spiced up with twists and turns that do just enough to keep your interest while raising the stakes as and when required. If you still enjoy the Bleach formula (and formulaic really is the word for it at this point) then this volume won't disappoint, but as we close in on 300 episodes the one moment within these episodes that felt truly fresh and exciting does serve as a reminder of how predictable most of the rest of it is. This may be par for the course with any long-running shounen series, but it still elicits a bit of a shrug and a sigh from us after so many years of following the show.

This UK release does suffer a little from a poor NTSC to PAL conversion with leads to juddery pans throughout the volume, and a couple of pieces of on-screen text are left untranslated if you're watching using the English language track, but this is otherwise an acceptable DVD release that broadly matches what we've seen from other recent volumes of the UK. The show's English dub remains decent enough, if not quite hitting the emotional peaks of the original Japanese treatment of these episodes.

Even if series twelve didn't leave us gnashing our teeth and praying for the quick return of Bleach's main story, it still feels good to be back on track with "the proper stuff" here, and as we've mentioned it succeeds in delivering everything you'd expect from the franchise with the addition of some of its strongest moments in recent memory to serve as a reminder of why you probably started watching this show in the first place. If it can build on and provide more such moments, perhaps we can really start looking forward to watching the series again.

7
A return to the story proper means more typical Bleach fare to please the long-running fans, coupled with some of its best moments since the show's early days.
COMMENT AND DISCUSS
blog comments powered by Disqus