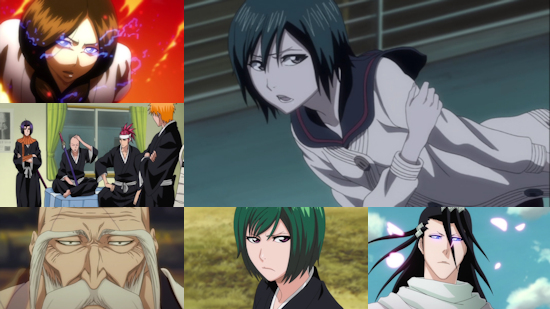 Although it seemed as if the day was close to being won at the end of the first half of Bleach's latest story arc, there's still plenty of threat left in Kagerosa and his army of Reigai as the second half of series fifteen gets underway.

Although safe under the protection of Ichigo, it seems that Nozomi, the first "mod soul" to come into being, isn't at all happy with this state of affairs and wants to train so that she too can join the fight against her creator to foil his plans. Although nobody involved in the situation is too happy with the idea for various reasons, there's little argument with her logic that the power she holds might be the only one capable of thwarting their foe once and for all.

Thus, Nozomi trains with Ichigo and company, while the other members of the Thirteen Court Guards Squads set out to fend off and ultimately defeat their Reigai clones... a mission which is easier said than done given the abilities and attitudes that these clones have inherited. Meanwhile, Kon gets an unexpected place in the spotlight for once, as his own existence as a mod soul gives him a sense of kinship with Nozomi that bonds the two through the trials and tribulations to come. All of this, of course, is underpinned with Ichigo's own travails as his spirit energy which has held him in good stead for so long as a substitute Soul Reaper looks set to desert him entirely.

If the first half of this series of Bleach was a snooze-fest (and to be honest it largely was), then this second half at least feels like an improvement - it has no shortage of action to offer up and most of it is more compelling than that produced in its earlier episodes, and there are actually some pretty nicely realised emotional moments for Kon and, more specifically, Ichigo. The latter of these moments reminds us, of course, that Bleach has nearly run its course in TV animated form, which adds all the more poignancy to the end of this story arc as we head into the show's final batch of episodes.

None of these improvements take this story arc into the stratosphere, but they do at least provide a more entertaining viewing experience that manages to bring some value to its story alongside the usual and more forgettable filler arc fare. If you were considering skipping this series of Bleach entirely, the conclusion to this release might be worth your time on its own if you're still sufficiently invested in the show as a whole at this point.

Beyond that, everything else here gets the thumbs-up from us - the English and Japanese language tracks remain competent, subtitles are all present and correct, and the general quality of the release in terms of video and presentation is also solid. In other words, nothing to worry potential purchasers of this volume.

So there we have it - Bleach on DVD will be done and dusted by the time we reach the autumn (assuming Kazé keep to their release schedule, which admittedly is a massive assumption), and this is another major milestone towards saying goodbye to Ichigo, Rukia and company. Given that, we could have expected something a little more grandiose from this story arc, but it did at least lift itself above abject mediocrity to deliver some decent moments. It's a long, long way from the pomp of those heady, early days of Bleach, but then again when has it ever reached those heights since?

6
An improvement over the first half of this story arc that provides more entertainment and some touching moments to lead into the final episodes of the series.
COMMENT AND DISCUSS
blog comments powered by Disqus