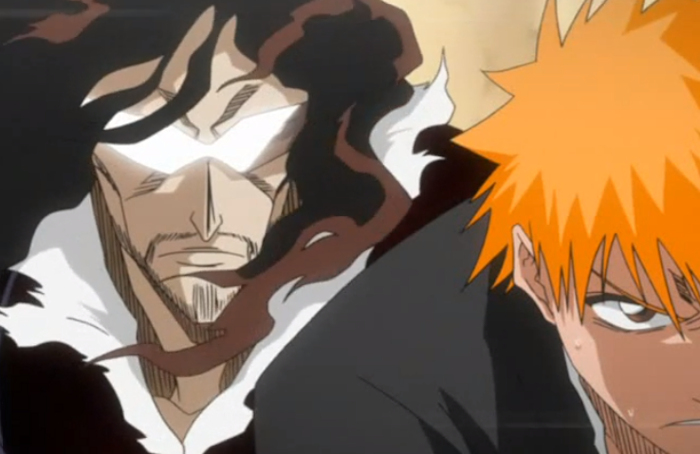 By this point in the game, as Bleach on DVD reaches and surpasses fifty episodes, it starts to become a little difficult to find anything new to write about the series - It has its tried and trusted formula down pat, and it's going to stick to it no matter what.  Not that this is necessarily a bad thing, as Bleach thus far has offered up a compelling action-led formula with hardly a pause for breath.

The end of the last volume of the series left us with our hero Ichigo in rather a tight spot, about to face Byakuya Kuchiki while tantalisingly close to saving Rukia from her executioners.  However, this isn't the kind of opponent you want to face without being suitably prepared, and so (after being whisked away against his will by Yoruichi) the three DVDs and twelve episodes which comprise this volume of Bleach are peppered throughout with coverage of Ichigo's training to make the most of the weaponry at his disposal.

The removal of Ichigo from the direct action allows us to catch up some more on the exploits of his friends (most notably Ishida) who are also running around Soul Society in their bid to free Rukia, while also delving deeper into the mysteries and confusion surrounding the murder of Captain Aizen.  As the plans surrounding Rukia's execution change, so the divisions between squad members increase, with the tension eventually pitting captain against captain, and superior against subordinate.

While this change in focus also helps to change the pace of the series and alter the focus to take in the bigger picture, it does tend to leave the story jumping all over the place, as we flash back to the Soul Reaper training of certain characters at one point, and even revisit the human world for what proves to be an entirely pointless fiftieth episode.

Thankfully despite that, and even with Ichigo's training proving to be a little overly long and lacking in any real dramatic tension (whatever happened to the good old-fashioned montage sequence?), there's still enough on show here to remind us of what makes Bleach such a thoroughly entertaining series, as the episodes available here provide smatterings of ridiculously over-powered but ultimately satisfying fighting to sate your need to watch people losing pints of blood but still finding time to engage in plenty of braggadocio.

Technically, I can't really fault either the video or audio side of this release - Everything is crisp, clear and colourful (and incidentally I continue to thoroughly enjoy the series soundtrack), although the last couple of the episodes on our final review disc seemed to have some slightly oddly placed chapter markers at the beginning of their respective episodes - Beware if you're the type of person to always skip the opening titles.

Let's be honest, if you've been collecting Bleach so far then you aren't all that likely to give up on it at this point, particularly with the next set of discs offering up a suitably explosive climax to the current story arc.  So, while these aren't the best episodes Bleach has had to offer us, and although even the extras aren't all that interesting this time around, the storyline does at least keep moving in the right direction, and with enough entertainment on offer to stop making Bleach become tedious, it continues to be a worthwhile watch.

7
A bit hit and miss as far as Bleach goes, but still enough action and excitement to please fans of the series.
COMMENT AND DISCUSS
blog comments powered by Disqus