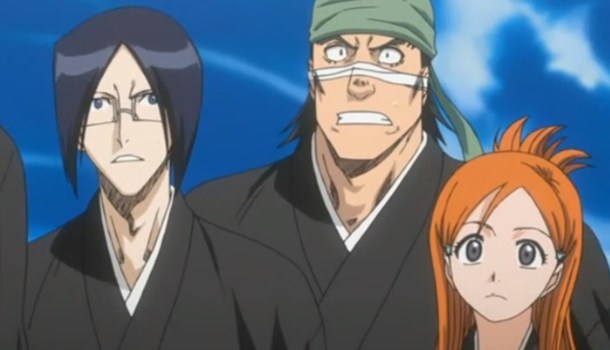 The end of the last two-disc volume of Bleach left us hanging mercilessly on the cusp of Rukia's execution, with Ichigo and his cohorts racing to make it to the execution grounds (and in the former case, to train up to an appropriately powerful level) before it's too late.  Will they make it in time, or indeed will the escalating in-fighting within Soul Society get in their way?

After building up to all of these important moments for what seems like so long now, it probably goes without saying that this second part of Bleach's third series is explosive stuff that has plenty of ground to cover, with the many seemingly disparate elements of Rukia's rescue and the on-going politics and rebellion within Soul Society carefully melding together with plenty of shocking twists and turns along the way.

If you're more interested in the action than the deeper and more salient points of the plot then you won't be left wanting either however, with Ichigo's face-off against Byakuya Kuchiki naturally taking centre-stage while the likes of Yoruichi and even Soul Society's head captain also get to strut their stuff.  As per my comments on the last volume of this series, this can make for a rather disjointed viewing experience with a tendency to jump about all over the place at times - Although this does prove frustrating just as you're getting into the heat of a particular battle only to be zoomed off elsewhere, it does avoid the torturous route of single fights that are waged for countless episodes without respite, which I suppose is a positive in the grand scheme of things.

The only real casualty of these ten episodes which close out this particular story arc is the sense of humour, which finds its employment greatly reduced in keeping with the darker tone of the stories in progress and the revelations therein.

If you can live without that however, then yet again Bleach continues to deliver exactly what it intends to for its target audience - In short, it's cool and it knows it is, and it therefore takes great glee in teasing the viewer before unleashing some particularly violent and spectacular delights upon its faithful.  Beyond that posturing exterior however lies what is actually a pretty solid and well-told story, that succeeds in progressing free of embarrassing plot holes (in fact, it's almost entirely too careful to explain everything to prove that it's all been thought through to the nth degree) while also setting things up nicely for the future direction of the series.  Its future direction after it regales us with a big, floor to ceiling stacked chunk of filler material for series four and five, that is.

In technical terms, both discs on this release fare as well as previous volumes, with no complaints of note about either audio or video quality, while the subtitles are all present and correct to boot.  Sadly, there's little in the way of extras on these two DVDs though, with production artwork pretty much all you get for your outlay.

So, three seasons and more than sixty episodes later Bleach is still managing to feel relatively fresh and exciting; I wouldn't dare call it "the thinking man's Naruto" as that would be patently unfair to both series... Except I think I just did.  Oops.  Regardless, if you like your anime action to be thick, fast and ridiculously overblown, then Bleach is where it's at - Let's just hope I can still say that in all honesty after two series of filler.

8
Bleach succeeds in closing out this major story arc in a suitably spectacular fashion.
LATEST REVIEWS