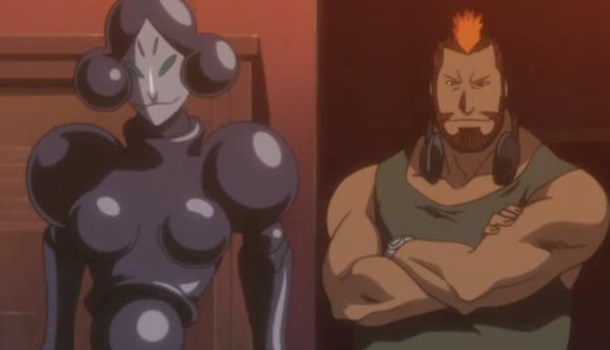 After a bit of a mini-hiatus in terms of DVD releases, Bleach is back courtesy of the second part of series four as we continue with the first of this show's "filler" sagas which pits Ichigo Kurozaki and his ever-growing band of allies up against the immortal and evil blood suckers known as the Bount.  Yes, that's right, the Bount... definitely not vampires or anything - However could you have confused the two?

Last time around, we learned that the subject of the Bount's interest was Ishida as the worlds only surviving Quincy despite the loss of his powers, and as the episodes contained within this volume start we find Ishida hospitalised as the result of his injuries from the last Bount kidnap attempt.  Even under the watchful eyes of Rukia and Ichigo amongst others, it soon becomes clear that Ishida isn't safe, with every tap and drop of rain soon becoming a mortal enemy for our band of heroes.

Despite navigating this obstacle and thus saving their wounded friend once again, Ishida seems none too happy about their attentions and wanders off, straight into the clutches of female Bount rebel Yoshino who saves him once again, albeit from himself on this occasion.  What develops from here is a mutual understanding between Ishida and his saviour which is arguably the closest Bleach has come to a love story thus far, as these two somewhat kindred spirits share the pain of their unique yet fraught lives before the threat of the rest of the Bount, lead by Kariya, comes knocking at both of their door once again.

Don't worry though; Bleach hasn't suddenly turned into some kind of shoujo romance series, as it continues to find time to deliver some spectacular action on occasion when some good-old fashioned scrapping is demanded of it.  While this can't quite match up to the splendour of the last "true" story arc, it still contains more than enough to keep the fans happy.  Unfortunately the actual story itself can't boast quite such a breath-taking outlook, as it threatens to become rather too ponderous and mired in its own self-importance at times, even before you take into consideration the age-old problem that any filler arc can't afford to make any fundamental progress with its major characters due to its very nature.  This further serves to take a little of the sting out of things, as we know that nothing can turn out for the worse in the case of Ishida, Ichigo et al which in turn removes at least some of the tension from the story.

If you can put this to the back of your mind or forget that fact outright on the other hand, the eight episodes on show here at least succeed in keeping Bleach's feel and vibe, which in many ways is enough to keep the viewer's interest to a reasonable degree at this juncture.  The story used by this arc is looking a little wobbly in places and is in danger of collapsing entirely if it becomes too tedious during its final three-disc volume, but for now it passes as a pretty good effort compared to the kind of filler offerings put forth by other similar series in recent years.  Yes Naruto, I'm looking at you...

7
Despite being a little drawn-out at times, Bleach's first filler arc remains reasonably enjoyable at this juncture.
LATEST REVIEWS