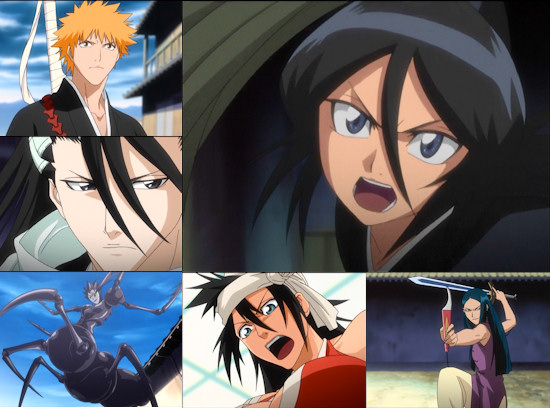 After an entire series of filler based in the real world via the beginning of its Bount story arc, the end of Bleach's fourth season made it clear where we headed next, and just as promised series five kicks off back on Soul Society complete with an even more dangerous Bount threat than ever before.

Indeed, thanks to the abundance of reishi all around them, the Bounts are even more lethal than ever thanks to their ability to absorb said reishi both to regenerate themselves and fuel their own abilities - a big problem not just for Ichigo and company as they too return to Soul Society in hot pursuit, but also for Seireitei and the Soul Reapers within too.

While the Bounts wreak merry havoc all around Soul Society and round-up an angry mob of local, disenchanted ruffians from some of the more deprived areas to assist with their quest for vengeance, we're also introduced to the Bounts creator - a woman named Rantao who looks more than a little familiar to some of our heroes...

Although the plot does edge forward courtesy of these developments, the real focus for the eight episodes spread across these two DVDs is in setting up a handful of showpiece battles, making the most of some of the more powerful characters on offer to set up some intriguing clashes, including Byakuya Kuchiki facing off against Bount leader Kariya before Ichigo also enters the fray, while Kenpachi Zaraki coming face-to-face against rebel Soul Reaper Maki Ichinose is also noteworthy.

These battles certainly retain Bleach's usual blend or ever-more lethal attacks, impossible speed and plenty of braggadocio, although these fights struggle to hold the same feeling of tension and importance as those earlier in the series, possibly due to the knowledge always lingering in the back of your mind that this is filler after all, and thus isn't important to main thrust of the show once it's all over.

In terms of plot progression and character development, this is easily the weakest DVD release so far, but on the other hand if you're a fan of Bleach for its action above all else, then the collection of scraps and struggles contained within this first part of series five will doubtless entertain and fulfil you just as much as previous releases.  Although production values vary from episode to episode, the overall quality for each episode is solid and backed up by a frankly excellent English dub if your preference lies there.  Extras are, sadly, as sparse as ever, leaving this particular release as one which is in danger of appealing to the hard-core Bleach fans only.

Thankfully, those hard-core fans are served well enough by these episodes courtesy of the usual blend of fighting and humour - just don't expect too much depth or darkness to this particular slice of the franchise as we enter its final season of filler (for now).

6
There's enough action to keep the biggest Bleach fans entertained, but there isn't much else to get your teeth into here.
COMMENT AND DISCUSS
blog comments powered by Disqus