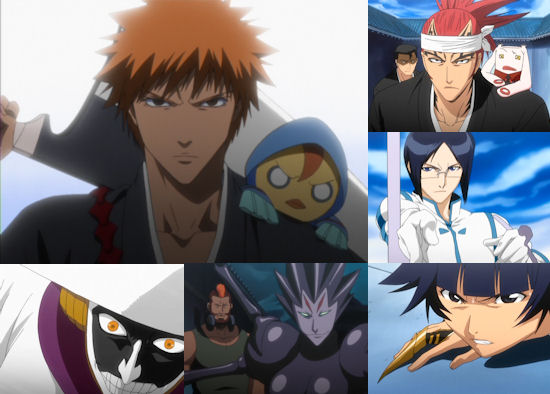 It's nice to be able to bring some good news to you within a review, so here's an all-important piece of information to take away from this piece with you - this is the last volume of Bleach's first filler arc, bringing an end to the Bount saga and putting us back on track to rejoin the manga's story-telling focus with series six.

Before I allow too much time for any relief or excitement that comes from this knowledge wash over you, we still have ten more episodes to tackle across these two discs as the Bount's attempt to destroy Seireitei comes ever-closer to fruition.  With the highest ranking Soul Reapers on a state of constant alert given the Bount invasion however, it isn't long until we start seeing some hefty face-offs between these super-powerful "Ryoka" and some of Soul Society's more powerful captains, not to mention Ichigo Kurosaki and Ishida as they too join the fray.  With Bount leader Kariya adding yet more power and threat to his already formidable arsenal, we're all set for a tense and dramatic finish... only to be summarily disappointed as the final climatic fight between Ichigo (who else?) and Kariya fizzles out to complete the arc with a whimper rather than a bang.

In fairness to these episodes they do succeed in avoiding the long, drawn-out fights which too often become the hallmark of Bleach, Naruto and the like, keeping any monologues and prevarication to a minimum in deference to quick, action-oriented affairs.  The trouble is that many of these pivotal battles tilt to the other extreme of feeling rushed, with endings that spring out of nowhere while merrily introducing an unexplained plot hole or two as they go.  This certainly isn't the Bleach we've become used to earlier in the series, with its sharp twists and turns that frequently cropped up in the midst of even its less important battles to keep your interest; instead, everything that goes on across the episodes on these discs carries a feeling of inevitability (and downright apathy at times), not helped by the knowledge that these instalments are filler and that everything has to be "reset" come the end of the story arc.

So, the Bount arc comes to a low-key and rather disappointing end that we perhaps should have anticipated right from the very start.  The past two series of Bleach haven't always suffered as much as you might expect from the deployment of such a large body of filler material, but series five in particular has allowed the cracks to show as the Bount story simply ran out of steam as it entered Soul Society.  There's still mindless entertainment value to be had from some of the fight sequences on show in these final episodes, but it's certainly not a patch on the treats Bleach has spoiled us with in the past.  Here's to a fast return to those heady days in series six.

6
It tries its best, but the climax to the Bount arc simply runs out of steam to deliver a limp ending to Bleach's first filler arc.
COMMENT AND DISCUSS
blog comments powered by Disqus