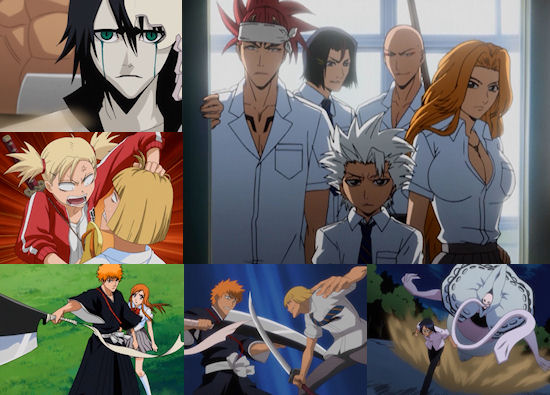 After spending a couple of seasons churning through its Bount filler arc, it's time to get back on track and return to the heart of Bleach's manga storylines as it enter series six with a renewed focus... and of course renewed hope for some top-notch entertainment from fans of the franchise.

First things first though, this new series has to deal with Ichigo and company's return to school after their latest adventure in Soul Society - a return that is soon overshadowed by the appearance of a new transfer student named Shinji Hirako.  Of course, this being anime said transfer student is a mysterious individual, who goes on to reveal himself to Ichigo as a member of the "Visored" - a group of Soul Reapers who have stepped into the world of Hollows in a quest for more power.  Ichigo is of interest to this group for obvious reasons given his own history, and indeed much of the subsequent episodes see Kurosaki trying to handle the increasing pressure of his literal inner demon as it threatens to take control of him.

Even this threat pales into comparison with a more immediate and vastly more powerful danger which races to the fore throughout the eleven episodes that make up this volume.  This massive threat comes courtesy of another intriguing group known as the Arrancar - Hollows given the powers of Soul Reapers via experiments conducted by a certain Sousuke Aizen.  Can these powerful beasts concocted by their ally turned enemy be defeated by the group of Soul Reapers sent to combat them?  We only scratch the surface of that question as this volume of the series ends.

Perhaps inevitably given the need to reset everything after its previous story arc (although these episodes do still retain some of the characters from the Bount story), this sixth series of Bleach takes quite a while to get its house in order and warm things up before getting into the thick of its more typical action fare.  That isn't to say that the earlier episodes on these DVDs are bereft of action, far from it, but such moments come in fits and starts as the focus of the series concentrates firmly on building its current major plot points.

Unfortunately it has to be said that some of these twists and developments are a bit daft (not least those surrounding Ichigo and Uryu Ishida's respective fathers), while at times episodes threaten to get bogged down in unnecessarily elongated bouts of comedy or flashbacks to major character's back stories.  Madarame in particular suffers from having almost an entire episode taken up with an explanation of his past right in the middle of a battle that's far more interesting than this history lesson - revealing engaging stories about what drives a character is fine, but when it detracts from the "main event" you're trying to watch it becomes an irritation.

When it really comes to the crunch though Bleach generally knows what its doing, and come the end of this volume you'll be left begging for just one more episode rather than live with the exciting cliff-hanger it provides until part two is released a few months down the line.  For all of my concerns about certain elements of this new story arc there are still enough powerful characters and proverbial petrol to pour on the series and keep it fuelled for some time to come, and from what we've seen here I'd certain expect for an explosive part two to this latest series.

7
Some dubious story-telling decisions aside, this is a solid start to series six that still has enough Soul Reaper action to keep fans happy.
COMMENT AND DISCUSS
blog comments powered by Disqus