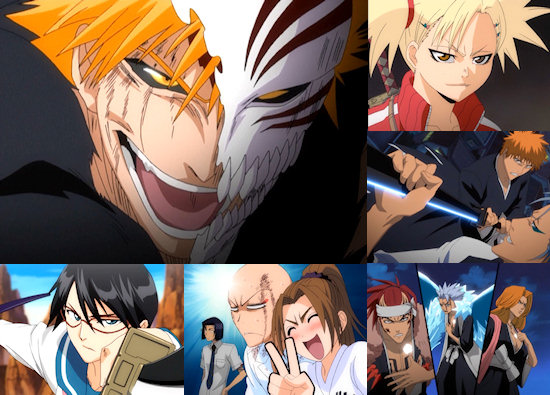 At long last, the opening volume of Bleach's sixth series pulled us away from the depths of its filler and planting us firmly back in the direction of its "proper" story by bringing Aizen's whereabouts and plans back to the fore while also introducing us to plenty of new threats and characters to get our teeth into.

Having set up its premise and thrown us into the midst of some intense fighting between a handful of Soul Society's finest and the "super-Hollows" known as the Arrancar, that first volume left us hanging from a rather juicy cliff - a decision which allows the opening to part two of this latest series on DVD to leap straight into the action, demonstrating the power of the Lieutenant and Captain-level Soul Reapers currently on duty before switching its focus to the intense on-going battle between Ichigo and the Arrancar known as Grimmjow.  The climax to this particular battle offers up an all-too rare reminder that, when push comes to shove, Bleach can be a visually arresting series above and beyond the more functional fare it usually passes for animation - with some impressive and fluid animation, it's a rare treat to see Bleach looking this slick before normal service is resumed for the remainder of the episodes across these two discs.

After concluding this series of big, brash battles, the story's focus turns elsewhere for much of the remainder of this volume.  Most importantly, it's time for Ichigo to deal with the increasingly problematic state of his "inner Hollow" - a situation which puts him in league with the Visored who we were first introduced to in part one, as he seeks their help in training him to overcome and control the demon within so that he can use its power to his advantage.

Ichigo isn't the only required to choose his path in the face of the Arrancar threat, as Inoue and Chad both have to find their place in the battles to come - a forthcoming conflict whose intensity is ramped up as Soul Society stumble across the true magnitude of Aizen's plans.  Although this seems like plenty for the eleven episodes here to feed on, we still drift towards borderline filler territory as the volume ends with the story of two sibling souls who find themselves caught up in an Arrancar-related problem of their own.

Thanks to the various elements on show within this volume of Bleach, its quality is understandably a little scattershot - the initial scraps with the Arrancar are reasonably satisfying fare, as is Ichigo's time with the Visored (despite it laying on the shounen platitudes a little too thick for our liking), and trying to develop Inoue's character a little more is certainly a welcome decision.  On the other hand, parts of this latest story arc feel clumsy in the way they're progressed: Ishida's attempts to regain his Quincy powers feels arbitrary and dull, while the sudden introduction of a royal family to Soul Society feels laughably forced (surely they would have been mentioned before now had they not been hastily thrown in to give importance to the story?

This feeling of a clumsily built story is by far Bleach's biggest enemy at this point - so many aspects of its plot feel made up or otherwise shoe-horned together that it threatens to lose any impression of being a "real" story set in a living, breathing world as it goes about breaking its own rules and adding major aspects to its canon without a care.  On a more positive note, the core aspects of this current story arc do manage to fit into Bleach's world a little more readily, and the series continues to know what its doing as far as steadily developing its major characters goes - even its blend of action, drama and humour remains reasonably sharp so that things never become dull even when you're rolling your eyes at some of its revelations.

Provided it can side-step some of those dubious aspects of plot development, Bleach's current story arc now seems well placed to start really pushing back into high octane shounen territory with series seven later this year - perhaps that will be the point where the show really manages to return to its form of old.

7
Aspects of its plot are clumsily introduced in an attempt to keep its story flowing, but there are still enough entertaining aspects to Bleach here to keep it moving forward and compelling for its fan base.
COMMENT AND DISCUSS
blog comments powered by Disqus