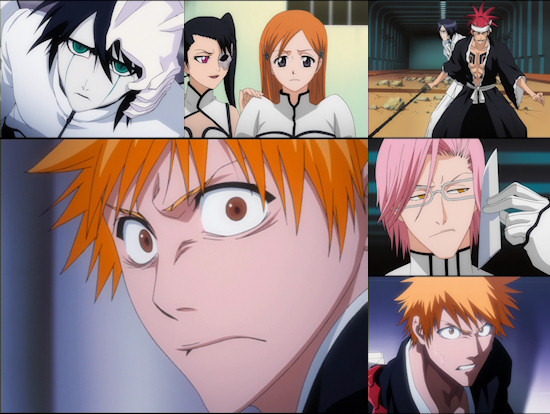 After a fair amount of distraction and just plain goofing around within Hueco Mundo, things are finally getting decidedly serious in Ichigo and company's mission to rescue Orihime from Aizen's clutches as we find ourselves with another collection of eight DVD episodes from Manga Entertainment.

For starters, we return immediately to the big cliff-hanger from part one of this eighth series, with Rukia still engaged in both a physical and psychological battle with the Espada claiming to be her former squad-mate Kaien.  It seems that all hope is lost in this particular conflict, until a flashback of recollections to her past gives Rukia the strand of determination it takes to turn the tables upon her current situation, albeit in a decidedly dumb fashion.

This rather sets the scene for what is very much an action-packed volume of Bleach which finds plenty of time to focus on a variety of head-to-heads featuring Renji, Ishida and (most notably) Ichigo himself, who over the course of the series faces up to a couple of mammoth opponents in what proves to be an increasingly pivotal state of affairs which also drags Orihime even further into the mess which surrounds her.

This focus on action at least serves to remind viewers of some of the reasons they probably started watching Bleach in the first place - there are some moments of ass-kicking brilliance which leave you well and truly with a grin plastered to your face.  Unfortunately, these moments are often also followed up by reasons why Bleach can be so frustrating to watch, as those sparks of genius have cold water poured on them by the show's staunch refusal to do draw a line in the sand and mark a definitive ending to many of its battles.

Moreover, at this current juncture Bleach also has a terrible habit of destroying its tension with comedy - I mentioned in my review of the last volume of the series how badly I want Nel and Pesche to be put to the sword, and if anything my desire to see them forcibly removed from the series is even greater at this point.  Nel in particular is the most irritating character I've ever had to put up with (although admittedly slightly more bearable in the generally decent English dub), but in some sense Pesche is worse for his habit of jumping into dramatic moments to "relieve the tension" when such action is most certainly not required.  Ironically, one occasion during this volume actually sees the series making a self-referential joke about ruining its own drama and tension - if only its producers could look a little closer and realise it's a folly they make all too often.

Despite being rather harsh on this series as of late (which is a natural side-effect of watching over one hundred and sixty episodes of the same thing), I have to hold my hand up and admit that this second half of Bleach's eighth season is a definite improvement over the first - it's tighter and more focused on important matters and action for the most part, and come the end of it we see a definite sense of growth and progression in some of its characters and their relationships, which is something that has arguably been lacking within the show of late.  If only it weren't for its annoying comic relief characters and bad habits, this would have been an outright good batch of episodes which leaves us in a tantalising position within its current arc.

The bad news?  Despite that tantalising position in the story, be prepared for another season of filler in the form of series nine.

English and Japanese 2.0 audio with English subtitles.  Production artwork and a text-free ending credit sequence are the sole extras here.

7
An improvement over the first half of the series which ups the pace and provides some important plot progression, despite incessantly falling into certain bad habits.
COMMENT AND DISCUSS
blog comments powered by Disqus