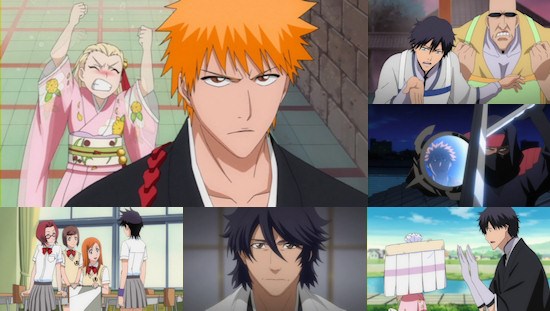 A new season of Bleach marks a new beginning for the franchise's UK anime presence as a whole - not only do we switch to a new story arc here within this ninth series, but this is also the first volume to be released via Kazé's UK presence, albeit distributed as ever by Manga Entertainment.  Just what, if anything, does this mean for the keen Bleach collectors among us?  We'll come to that in just a moment.

First however, to our new story arc - after cruelly leaving us hanging without finishing Ichigo and company's business with the Arrancar and their rescue of Orihime, we jet off in a completely different direction for the episodes contained across these two DVDs and beyond.  Yes, that's right; we're back in filler arc territory, with the anime killing some time while it waits for the manga to leap sufficiently ahead by presenting its own original story.  More specifically, this latest story is labelled The New Leader Shusuke Amagai arc, and as that title suggests in introduces a new captain for Soul Society's squad three in light of Gin's defection alongside Aizen.  In a stark departure from normal protocol (and to aid this original story in its goals, of course) this new captain and his third seat comrade are chosen from outside of the existing members of the squad, instead bringing a pair of completely unknown outsiders into the fold to take up the reigns.  Yes, it's a horribly contrived way of setting up a story which can be "reset" once we return to the show's proper story, but there you have it.

Oddly enough, despite being the arc's titular character most of our focus within this first half of series nine is elsewhere, as Ichigo and Rukia's life in the world of the living is once again disrupted by a newcomer in town; a young princess from Soul Society nobility named Rurichiyo Kasumioji and her two bodyguards.  It just so happens that Rurichiyo winds up moving in next door to Ichigo; as a result he soon finds himself wrapped up in her troubles as, unbeknownst to her, a band of decidedly unique assassins move in to take out the princess as part of a coup instigated by a man named Kumoi in the hope of taking control of the family himself.  As the danger escalates, Ichigo's usual band of friends are drawn into the fray to protect both the princess and their own lives in another series of challenging one-on-one battles.

The result of all this is the beginnings of a story arc that is far from memorable, but does at least get into the thick of action aplenty by the time we reach the second DVD of this particular set as it pits the usual suspects up against some new and powerful foes - if you watch Bleach to satiate your desire for action, then these episodes should be just a ticket.  The trouble is, coming as it does in the middle of an on-going major story arc, this sudden shift to an unrelated side-story is both jarring and irritating - as much as I appreciate a break from hearing Nel's whining for a little while, to leave things hanging to dip into a decidedly run-of-the-mill filler arc isn't exactly the kind of thing to get my heart racing.

In terms of this first DVD release of Bleach to come from Kazé, it's certainly managed to be a little more striking in terms of both box art, disc labels and menus - it's only a minor improvement in the grand scheme of things (and I have to admit that the DVD labels are as eye-catching as they are likely to induce dizziness), but it's something to appreciated at least.

This is, unfortunately, more than can be said for the content of the discs themselves.  Although the video and audio quality of these episodes are of the same palatable mediocrity of previous Bleach releases, long-standing fans of the show will quickly notice a glaring omission from each episode on these discs - the lack of any next episode previews or the (usually comical) "vignettes" that accompany them.  I have no idea why these elements have been shorn from these episodes, but it's really disappointing to see anything cut from this release where they've always been present and correct in the past - sure, it won't disrupt your enjoyment of the episodes themselves and the wider story within them, but if you're a fan of the show's comic asides post-credits then you'll be faced with a big hole in your entertainment with this particular release.  We can only hope that this is something that Kazé can rectify in future volumes of the series to ensure that we get the full content of the original Japanese broadcasts, rather than lopping a minute or so off the end of each instalment.

Between this and the "more of the same" demeanour of this new story arc of Bleach, there isn't a huge amount to get us excited here - this doesn't look like being a notable filler arc for the series by any particular measure, meaning that it does enough to satisfy the hardcore Bleach fans with a thirst for more action and adventure no matter its packaging; for more casual viewers however, this is likely to be viewed simply as a frustrating pause before we return to the real action within Hueco Mundo in series ten.

English and Japanese audio with English subtitles.  The sole extras on this release are text-free opening and ending credits.