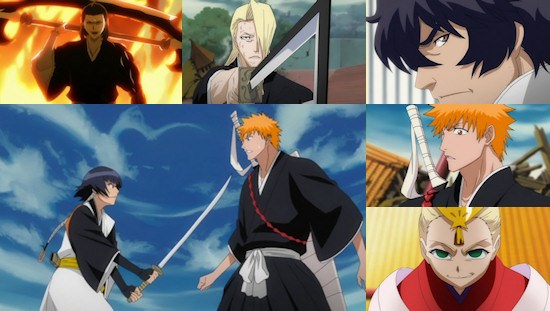 No sooner had this latest filler arc of Bleach began, does it end via this second two-disc collection to close out season nine of the series.  Thankfully, things were just beginning to get juicy as the first half of this series ended, so what's next for Ichigo as his involvement with the Kasumiyoji clan and its heir Rurichiyo becomes ever-more complicated.

If nothing else, the chickens of appointing a previously unknown third seat for squad three have already come home to roost, with Kibune's links to the malicious plans afoot within the Kasumiyoji clan already revealed, but what of new squad captain Amagai?  His idea for a joint training exercise between all of Soul Society's guardian squads, despite being rejected, seems geared to sow seeds of competition and discontent between those various squads, but in the long-run Amagai's intentions seem to be genuine... or are they?

Meanwhile, Rurichiyo is causing all sorts of trouble for both Ichigo and her official minders as she decides to take matters into her own hands, sneaking off to attend her wedding ceremony in the hope of bringing the current conflicts and targeting of those dear to her to end.  Rurichiyo's idealism only serves to wreak havoc, as Ichigo and Rukia's attempt to rescue her from the clutches of her clan see them pitted against their own friends within Soul Society, namely Sui Fon, who take a dim view on their actions.  You'd have thought Ichigo would have earned some trust after so long as a substitute Soul Reaper by now wouldn't you?

Ultimately, our attention spins right back around to Captain Amagai, as his shifting stance on events as they develop fall away to reveal his true goals and desires, which provides a suitably epic battle to close out this particular story and square the circle suitably to allow us to return to Bleach's "real" story in series ten.

After causing something of an outcry last time around, let's address one important point first - this second volume of Bleach to come via Kaze's UK presence is provided in a complete form, with all post-credit episode previews and vignettes in their proper place after their omission from part one of this series.  In short, normal service has been resumed here, which is good to see.  That aside, this isn't the best looking volume of Bleach you'll ever see - its animation quality isn't great as it is, but the combination of mediocre transfer and NTSC to PAL conversion ensures that these discs are watchable, but little more.  Still, at least the series is helped along by Shiro Sagisu's consistently wonderful soundtrack to the series, and the English voice cast continue to do a very good job for the most part with the major exception of Kibune's voice actor, whose turn at the mic is by turns shamefully hammy and impossibly bland.  Subtitle-wise, there are a handful of invalid characters or missing lines across these two DVDs, but nothing too show-stopping.

Much like the first half of this filler arc, the culmination of Bleach's current story is predictable and with plot holes that don't require a huge application of logic to pick out, marking it out as perhaps the weakest story arc we've presented with thus far.  Then again, it does at least manage to make room for some of the bombastic action which has become a staple of Bleach and other shows of its ilk, which might just be enough to make is palatable for hardcore fans - given that this is all we have to keep up ticking over until 2013 when series ten reaches the UK, fans will have to take what they can get for now.

English and Japanese audio with English subtitles.  The sole extras on this release are text-free opening and ending credits.

6
This story arc shows occasional flashes of life during its latter stages, but it's still arguably the weakest series Bleach has served up to us yet.
LATEST REVIEWS