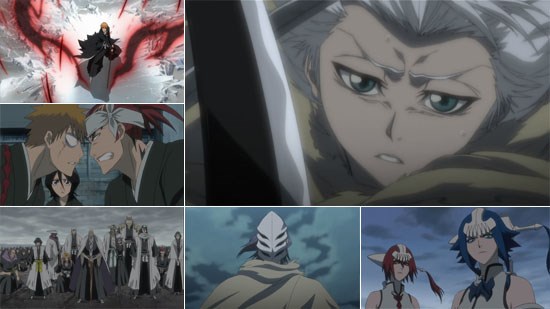 I’ll admit this: when going in to review films based on long-running series, I don’t expect much. The story has to be outside of the canon and not change things so everything needs to be wrapped up and neatly packed away when it's done. Naruto does this with all of its films, but with the Bleach series it seems to do things a little differently. The first film impressed, so will the second actually prove to be a worthwhile venture?

Toshiro Hitsugaya and his Squad 10 comrades are transporting the mysterious King’s Seal when suddenly they are attacked by unknown assailants. While battling the leader of the group, Hitsugaya is injured and then promptly abandons his post to chase after the group. With the King’s Seal stolen and Hitsugaya missing, it isn’t long before Soul Society swings into action and Ichigo is drawn into the confusion.

Like I said before, we were impressed by the first Bleach film, so this second one has a lot to live up to. While it doesn’t quite match the lofty heights of the first film, it still does a damn good job. Where the Naruto films are usually just overly elaborate missions, the Bleach films seem to take it upon themselves to involve a large amount of the regular cast and certainly give much more bang for your buck. If you are looking for some major action, then you find it in spades here.

I think the interesting point for this film is that it casts Hitsugaya into the title role along with Ichigo. The pint-sized captain is as hard-headed as Ichigo himself and the pair of characters are very much alike. Hitsugaya does spend the best part of two-thirds of the film wandering around, but when he does get into a scrap he really knows how to make the most of it.

If there is one complaint that has to be levelled at the film, it's that it does plod along with its story for first half of the movie. While there is tension in discovering the truth of Hitsugaya and his connection to the mysterious man, you can pretty much guess it within the first two minutes of the first flashback. Predictability is the film's main weakness and while it is true that the series isn’t known for being too cerebral, it would have been nice to mix things up a little bit with some food for thought.

What Bleach does well is looking at honour, friendship and the burden of bottling the thoughts and feelings of painful memories up. Alright it is intermixed with fights of god-like proportions, but the message is still the same and unlike Naruto it doesn’t try to force this kind of message down your throat like some sort of Saturday morning cartoon special.

For those looking for what Bleach is known for, basically huge-arse battles, then you are well accommodated here. True you have to sit through some soul-searching before getting to some spots of action, but once the last portion of the film kicks in, everyone (and I mean everyone) gets in on the action. Pretty much most of the Soul Society cast get in on the fun, and the last half an hour will be very much a happy time for the action junkies.

The film isn’t going to be winning any Oscars for being a thought-provoking effort, but for the fact it keeps you entertained right until the very end and doesn’t feel like a story that shouldn’t be based in the same universe as the series is an achievement in itself. If anything, this film should be used as an introduction to Bleach as it is quite self-contained and shows the franchise's action at its best, though it does contain some spoilers should the viewer not be far enough in the TV show's plot.

It’s rare that I recommend a film based on a long running series, but damn... here I am.  It’s fun, it’s exciting and it’ll keep you transfixed until the credits roll at the end. It’s a nice big action film that isn’t pushing the grey matter, but you’re having too much fun to care. This is Bleach at its finest and we can only hope the film series keeps this high quality up.

An interesting look at the creation of the film, along with the standard artwork and trailers.  5.1 surround sound is also included in both English and Japanese languages.