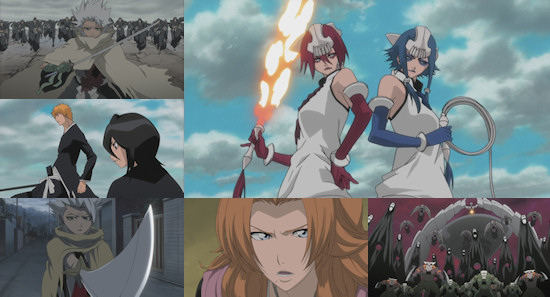 It seems that Bleach on Blu-Ray is rather akin to buses - you don't see anything of them for what seems like an eternity, then three of them turn up at once.  Never one to look gift horses in the mouth however, we've been lapping up this opportunity to check out all three of Bleach's theatrical outings released in the UK thus far in High Definition.

At the centre of this second film, The Diamond Dust Rebellion, we have arguably one of the most criminally under-utilised characters in the TV series so far; fan favourite Toshiro Hitsugaya.  We join the film as Soul Society sets about transferring an ancient artefact belonging to the Royal Family known as the Ouin to a new location - nobody seems to know exactly powers this artefact holds, but what they do know is that it requires the utmost of care to prevent it from falling into the wrong hands.

Unfortunately then, within just minutes of the film opening do we see - you guessed it - the Ouin falling into the wrong hands.  While a masked assailant causes chaos as he snatches the artefact from the grasp of its rightful owners, it seems that his appearance has a decidedly odd effect on Captain Hitsugaya.  Before we know it, Toshiro has set off in pursuit of the thief while hiding his presence from all and sundry, his Soul Reaper colleagues included.

It's no surprise then that Hitsugaya soon finds the finger of suspicion pointing in his general direction, causing his squad to be effectively disbanded and put under house arrest.  But just where is the Captain?  Of all people, it's Ichigo Kurosaki who holds the answer to this, stumbling across a wounded Hitsugaya while investigating some strange activity in the area.  Although Hitsugaya won't tell Ichigo what's going on, his appearance does at least give both he and his Soul Reaper comrades enough clues to begin their discovery of the truth and with it lifting the lid on another of Soul Society's dark secrets.

All of this amounts to another theatrical Bleach outing which checks off all the required boxes - a plot which doesn't impact upon the franchise's main story (although there must be some pretty rich builders in Soul Society given how often Seireitei needs to be massively rebuilt), some new characters to help this along and, needless to say, some brief action set pieces that lead into a massive outpouring of blood-soaked, sword-wielding fisticuffs towards the end of the film.  All of this is delivered in a quick-fire and effortlessly slick style that ramps up the show's normal animation quality quite considerably to suit its cinematic presence - an improvement helped yet further by a beautiful Blu-Ray treatment which most definitely makes the most of that uplifted aesthetic.

Where The Diamond Dust Rebellion does falter a little is with aspects of its characterisation - although all of the regulars are well attended to, the main new entrant into the plot Kusaka is really given no personality at all, which makes things rather difficult when his relationship with Toshiro is positioned as one of the major drivers of the movie.  Instead, we're left with a case of "generic baddie syndrome", where the antagonist's actions are ill-explained and ultimately don't make all that much sense.

Still, if you're not watching this Bleach movie for its impeccable characterisation (and who is?) this is a decently produced slice of blockbuster anime fare that delivers everything you'd expect from such an offering.  It's big, dumb, shounen action given a sheen of heartfelt emotion, and it works more often than it lands horribly on its face.  Add to that how great it looks on Blu-Ray, and much like its theatrical brethren it's both a worth purchase for Blu-Ray fans and a worthy upgrade for fans who already own the film on DVD.  Now, if only we'd been given English subtitles for the wonderful "making of" feature included on the disc in a French subtitle-only form...

Sadly, the disc features no English language extras, but does contain a French subtitled "Making of" documentary which features interviews with the film's director and character designer, music composer Shiro Sagisu, ending theme performers Sambomaster and behind the scenes segments with the photography, special effects and background artists.  Also included in French subtitle-only form are original Japanese trailers for the movie.

7
An accomplished outing which achieves everything you might expect from a Bleach movie. Besides which, it looks rather gorgeous on Blu-Ray...
COMMENT AND DISCUSS
blog comments powered by Disqus