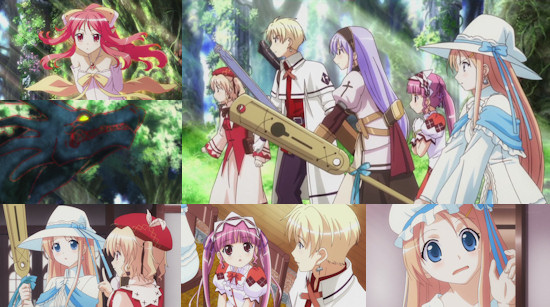 Blessing of the Campanella - Eps. 1-7

The latest in a long tradition of visual novel to anime adaptations for Japan's summer season is Shukufuku no Campanella (or Blessing of the Campanella), a series which has since been picked up via FUNimation and is thus now streaming to the UK via their YouTube site.  But can it avoid falling into the usual pitfalls that blight so many similar adaptations?

After giving us a glimpse of a sleeping girl named Minette, we're quickly introduced to the members of the Oasis clan, a group tasked with completing quests and generally running errands for the people of Ert'Aria, a bustling trading town and island of the world's Nostrum Region.  As you might expect, the individuals who reside within or help out the clan are varied, from head of the clan Carina Verritti through to a knight named Chelsea Arcot and a street performer called Agnes Boulange - indeed, the only similarity which ties them all together aside from their clan membership is the fact that they're all female... all, that is, aside from Leicester Maycraft, a tradesman and the effective centrepiece of the series, and his father who is also part of the clan.

Of course, being the main male protagonist of a visual novel adaptation can mean only one thing, and that is the requirement for all of the show's girls to fawn over you.  Whether it's Carina's outright affection towards him, rival Tortilla Company's attempts to woo him, or the aforementioned auotomata Minette's insistence on calling him "Papa" after she is awoken as the result of a meteor shower, Leicester certainly isn't left wanting for female attention.

That aside, the series as a whole follows the Oasis clan as they go about completing various quests, which normally bring them into contact with some kind of creature or other that is under the control of some crystal or other, resulting into what is almost a "monster of the week" affair before a more targeted storyline begins to develop as we move into the second half of the series.

The trouble is that all of these quests take place without any feeling of peril or urgency, leaving the clan members to largely mill around and chat as though they're attending some kind of corporate picnic rather than concerning themselves with any kind of urgent or dangerous business.  Similarly, even when something supposedly threatening does appear, any action to speak of feels lifeless and poorly paced to leave a steril and unexciting viewing experience which only shows any sign of changing in episode seven where things finally threaten to get interesting for a moment.

Without any excitement to speak of, Blessing of the Campanella instead falls back heavily upon its visual novel roots, hoping to get by via throwing lots of pretty girls doing cute things at the viewer before adding the odd spoonful of fan service to hold their interest.  Tortilla Company's appearances also blend some humour into the mix, but this quickly becomes repetitive and predictable until this too proves to be utterly forgettable.

Overall then, there's simply nothing interesting about Blessing of the Campanella if you discount the last ten minutes or so of episode seven, which potentially points to a little more hope for the second half of the series.  Watching the rest of the series is a long haul for that tiny glimmer of hope however, as even admiring sweet girls in pretty costumes will only get you so far before your attention begins to wander to more exciting things, such as that laundry that needs doing or whether you ought to stock up on ketchup in case you fancy fish and chips tonight.  When dirty washing holds more promise of excitement than a few hours of anime, you know there's something wrong with the series in question, and sadly Blessing of the Campanella flounders completely in the face of a hearty spin cycle.

Blessing of the Campanella can currently be viewed in streaming form on the FUNimation YouTube channel.

5
There's a spark of life going into the second half of the series, but reaching that point is an exercise in tedium and mediocrity.
COMMENT AND DISCUSS
blog comments powered by Disqus