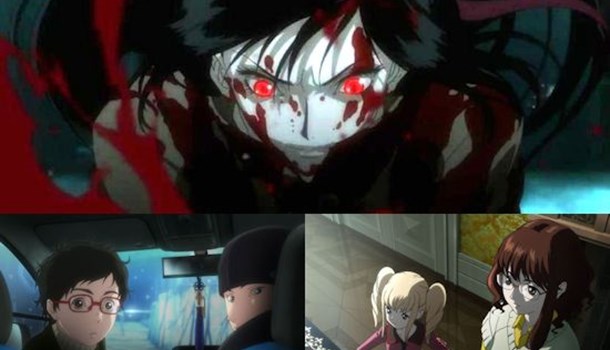 Although Blood-C hasn't yet reached our shores on physical form, it did find its way to the UK thanks to streaming service NicoNico, serving as a useful precursor for this theatrical follow-on screened at both of Scotland Loves Anime 2012's weekends.

Set six months after the events of the main series, The Last Dark shifts our focus from the island of that initial foray to the more familiar surroundings of Tokyo, as Saya Kisaragi (although don't call her that to her face) continues to hunt down Fumito Nanahara after his deception was revealed at the end of the series proper.  No sooner does the movie begin than we get our first introduction to a so-called "Elder Bairn", Tokyo-style, as one of these monsters with a sole interest in eating humans pops up on the subway.  Of course, those six months since we last saw Saya have done little to dampen her ability to despatch these beasts, and she does so in suitably spectacular fashion.  A little too spectacular in fact, as she comes to the attention of some unwanted elements.

Luckily for her, Saya's spot of beast-slaying also involved her saving a girl with some influential friends - a group known as SIRRUT, funded by a wealthy backer but made up of a ragtag of young hackers and the like looking to fight back against the deployment of a so-called "Youth Ordinance Bill" to protect the city's youth by limiting their movements and Internet access.  Naturally, all of this nefarious activity seems to lead back to one man - Fumito, as the full extent of his grip on Tokyo is revealed via secret organisations under his command.

For Saya's part, she cares for only one thing - to find Fumito and kill him, which proves to be easier said than done thanks to his hidden base and ability to keep news of his movements from leaking out.  This leaves Saya with no choice but to work alongside SIRRUT; a decision which sees her growing surprisingly close to some of its number to once again raise questions as to whether there is more to this girl than the simple monster that Fumito seems to desire her as.

Given that the Blood-C TV series set its tone as an incredibly bloody, violent and visceral piece with a huge twist to its tale that arguably did much to bolster what was otherwise threatening to become a typical "monster of the week" show, it's actually surprising to see The Last Dark taking a decidedly different path rather than using its theatrical outing to present a more bombastic version of what the TV series did well for existing fans.  Although its production staff claim that The Last Dark is suitable for newcomers, it's hard to imagine it being particularly satisfying without the knowledge of Saya's back story that comes with that series, yet nonetheless the film works hard to introduce a batch of new characters to this film while also toning down the gore somewhat and limiting the film's action to only a handful of sequences which never reach the spectacular level of its predecessor.

The result of this attempt to bring together existing fans and newcomers to the series is a film that is undeniably polished and decently paced, but one that never really has you reaching for the dictionary of adjectives.  Whether it's trying its hand at a touch of comedy, extracting some emotion from proceedings or delivering a dose of action, everything presented on-screen is passable but never jaw-dropping or hugely notable - indeed, even what looks to be the film's grand finale fizzles out in a surprisingly short amount of time before delivering a denouement to the series that never really feels completely satisfying even to those who have watched Blood-C from beginning to end.

This leaves us with a movie that is hard to say anything about - there's nothing we can really pin down to fault with the production aside from picking nits in some moments of duff CG or a unimaginative final monster, yet by the same token there's nothing we can lift up above the rest of the movie to laud and offer up as a reason to watch it.  In other words, we can absolutely inform you that Blood-C: The Last Dark exists, but to recommend you go and watch it if you get the chance to or advise you give it a wide berth is really beyond our capacity to analyse what is an accomplished but lifeless, and ultimately slightly mediocre, movie.

It isn't very often that you put a TV anime and its theatrical outing side-by-side and then note that it's the TV material that is more ambitious, brave and boundary-pushing of the two, but that's entirely the case with Blood-C - sure, The Last Dark is a solid and well-produced film, but it lacks the ability to elicit a reaction from the viewer whereas the TV series (for any flaws it had) could still shock, surprise and entertain.  If you're looking for a run-of-the-mill supernatural anime movie then this will probably float your boat, but in all honesty the Blood-C TV anime is a far more compelling viewing experience provided you can stomach its extremes of gore.

Blood-C: The Last Dark was screened at the Glasgow and Edinburgh weekends of Scotland Loves Anime 2012

5
For all of its high production values, The Last Dark feels rather lifeless and ultimately turns in a distinctly average viewing experience.
LATEST REVIEWS