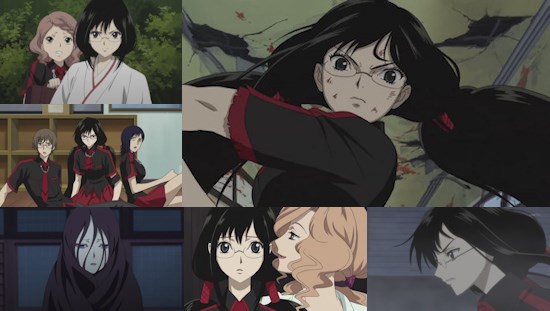 Watching the first few episodes of Blood-C was a bit like having a conversation with a particularly dull celebrity - lots of meaningless small talk punctuated by occasional reminders of why you're even talking to them in the first place, that being that they're actually exceedingly good at doing what is required of them when push comes to shove.

Along those lines, Blood-C's early efforts were filled almost to the brim with the minutiae of its world, having us following its protagonist Saya as she went to school, hung out with her friends, drank coffee, ate snacks, drank some more coffee, ate lunch... you get the point.  These countless scenes of a dull, listless nature were only made bearable by the show's action portions, which saw Saya slicing and dicing with various monsters going by the collective name of the Elder Bairns.  Thankfully, by the end of its fourth episode the show's more than subtle hints were pointing towards this being more than simply a monster of the week affair - something altogether more nefarious is at work within this otherwise sleepy town.  But what?

Despite those hints, and regardless of the increasing questions which begin to swim around Saya about her true nature and exactly why she's been tasked with fighting the Elder Bairns, it isn't until the show's penultimate episode that we finally see our questions answered, via a revelation that requires substantial suspension of disbelief but one that is an excellent punch to the gut considering all that's come before.  This in turn leads to a brutal finale which paves the way towards next year's theatrical Blood-C movie, while still drawing a line under the content of this TV series in a relatively satisfactory manner.

We are, however, getting ahead of ourselves here - what of the rest of the series until this final denouement?  In truth, it's very much a mixed bag.  Saya's battles against the Elder Bairns only become more bloody, fascinating and visceral as the series progresses, even more so as her friends and classmates are thrown into the midst of the fray with no holds barred and no attempt to spare the viewer from its sickening, bone-crunching violence - aside from the inevitable TV broadcast censorship which deprives (or perhaps saves) us from "the juicy bits".  These scenes are clearly where the real effort of Blood-C has been focused, containing lots of visual brilliance (albeit tempered by NicoNico's horrible low-quality streams) to shock and enthral the viewer, and they are often both uncomfortable yet fascinating to watch as a result.

Despite these moments of wide-eyed wonder mixed with revulsion, Blood-C continues to have some rather large problems which it fails to deal with.  Until its final episodes we still find ourselves having to suffer dull, long-winded scenes of Saya drinking coffee which are still not justified by their final pay-off, while other scenes of dialogue are either laughably stupid or simply not very interesting or revealing.

Equally damaging to the series is that Saya is... how do I put this... rubbish at protecting her supposed friends and fellow townsfolk.  Episode after episode sees Saya watching in shock until  after someone has been devoured before leaping into action, then breaking down in shock at the death and carnage she's just witnessed.  Perhaps if she's been a little more expedient, none of this would have even happened?  This is simply one example of a wider problem within Blood-C as it occasionally bumps unexpectedly upon the edges of unintentional hilarity - a ridiculously mistimed confession of love takes the edge off of a great episode (even if the reason for said confession soon becomes clear), while the level of violence in the final instalment is frequently tear-jerking - tears of cruel laughter that is, as humans are stuffed into a bag and then literally blended by a monster.  One shouldn't laugh at such things, but they're presented in such a way that you simply can't help yourself.

These misunderstandings as to how such moments will be interpreted by viewers is a real shame, as it detracts from a series that can be powerful and provide some smart twists and turns as it progresses - you can't watch the first half of episode nine with anything other than horrified fascination as the highlight of numerous similar moments throughout the show.  Arguably Blood-C's biggest flaw is that ultimately it's set out to be controversial and blood-soaked only to swing too far in that direction towards accidental comedy, but regardless it has the feeling of a brave series that looks the part but never quite adds up to the sum of some of its component parts.  Perhaps Production IG can learn from this experience and provide the blood and guts without the sniggers and giggles when Blood-C hits the silver screen.

Premium Members of its service can currently watch Blood-C in streaming form on NicoNico.

6
The most fantastically blood-soaked violence you're likely to find in modern anime is coupled with some great ideas - just try not to giggle when things get a little over the top.
LATEST REVIEWS