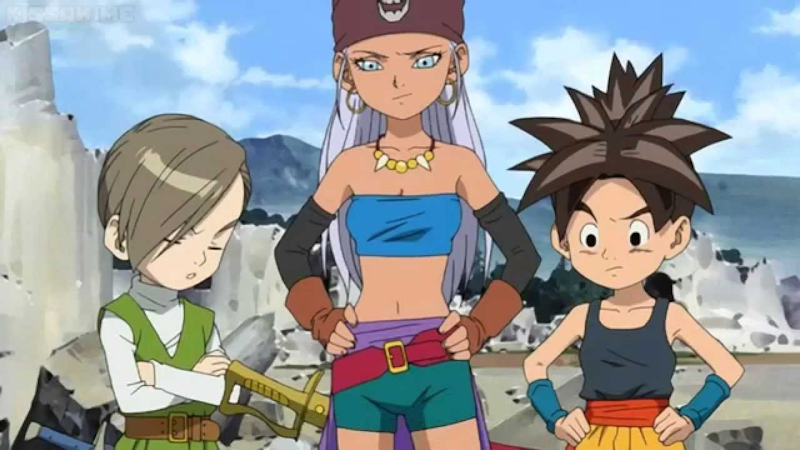 You know that feeling you get when you watch the Saturday morning cartoons of your bygone youth, but in the cold light of adulthood they just seem dated and contrived? Watching Blue Dragon is like that. Except you never loved it as a child. The rose-tinted film of nostalgia is replaced with the cold slap of tedium.

Blue Dragon – an adaptation of the Xbox 360 game, not the range of cooking sauces (although this would have been a lot more original) – suffers from one fatal flaw: lack of inspiration. The whole thing is just so tepid and unoriginal, and I was trying to figure out where I’d seen it all before. Then you realise you haven’t – it’s just boring.

The plot proceeds thusly: Shu, a hot-headed young man with a face only a mother could love, encounters Zola and Jiro, a pair of warriors who are searching for a secret power – the Blue Dragon. In this series, everyone who’s anyone has what’s known as a shadow (a stupendously unimaginative name) – a massive mythical creature which pops out and fights their battles for them when needed.

When Shu’s village is attacked, it turns out that the power of the Blue Dragon was within him all along. How exactly he got this power is never really adequately explained, but at any rate, Shu ends up travelling with the enigmatic pair, tailed by his irritating female counterpart Kluke, in an effort to depose the evil king Nene. Once more, the exact details of this terrible monarch’s crimes remain undisclosed, but I’m sure this will become apparent in later episodes, assuming the writers can be bothered to throw us a bone.

To be honest, no element of Blue Dragon ever raises its head above average, at best. The character designs are nice enough, if vaguely dull, and the soundtrack is fine I suppose, although nothing special. That’s really all the praise one can lavish upon the series. The action just boils down to some extremely mind-numbing swordplay and dreary monster-wrangling, and the characters lie somewhere between tired clichés and blatant rip-offs. You’ve got the aforementioned Shu; who is extremely dim but up for a fight, Jiro; the brooding young overachiever (whom they may as well have just named Sasuke-lite) and Marumaro, an imp-like creature who, given his attraction to human women outside of his species, has obviously got some problems. I could describe the rest of the cast, but honestly you’ve really just seen it all before. Not one character even scratches the surface of being likable, especially not when the voice actors are all phoning it in.

I’ve sort of come around to the idea that Blue Dragon was created by a captured team of artists, writers and so on; cruelly forced into making an animé that their hearts weren’t really in. Actually, this may not be too far from the truth. But that doesn’t really happen does it? Making a substandard series, simply to cash in on the success of a moderately popular video game? Surely not.

3
Blue Dragon is one best avoided. Unless you have a penchant for wearisome Pokémon-clones that are ten years too late. And if you do, seek professional help.
COMMENT AND DISCUSS
blog comments powered by Disqus