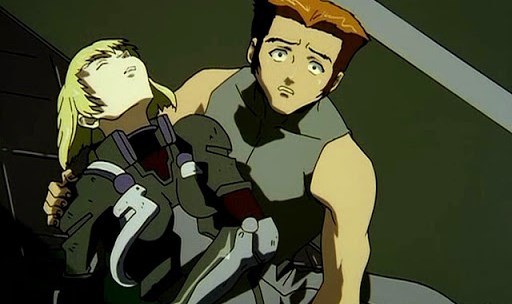 Having only caught a few episodes on Blue Gender as part of the Sci-Fi channels “Saiko Exciting” block a couple years back, I wasn’t sure what to expect with Blue Gender The Warrior, a movie that basically retells the story in a condensed and slightly different way. Having not had good experiences with movies like this (accept of course the Gundam movie) I was expecting the worst. I was wrong.

Yuji allows himself to be cryogenically frozen in the hope that researchers would one day find a way to help his incurable disease. Assured that it a cure isn’t too far into the future, this is deemed as the only way he can survive. Unfortunately, he is only awoken 22 years into the future, in a time where mysterious alien creatures known as the blue have succeeded in almost wiping out the entire Earth’s population. Apart from scarce survivors on Earth, there is also the people of Second Earth who battle against the Blue. These people of the second Earth believe that only those who can fight are deemed suitable to survive. Yuji, found by these soldiers of the new planet, finds himself forced to fight in order to save himself, but also has to come to terms with the way which people now live. Although the story is a little thin, the way in which the characters interact with one another helps the grim visions of the future become more believable. Unfortunately though, the chopping down of Blue Gender’s story means a lot of precious character development had to be cut out meaning that it makes an already action-orientated story seem a lot more shallow.

The design work is top notch, the mecha and alien designs are slick and sophisticated, with each action scene being fast-paced and stylish enough to take away from the plot’s shortcomings. The dubbing seemed to be okay as well, with the emotionless drone of Marlene contributing to her overall “killing machine” type character. You can tell all the voice actors took their roles very seriously.

If anyone has seen the TV series, I don’t see any reason why I should endorse this release, but if you don’t mind that this is just a rehash of a TV series and all you really want to see is a little mindless violence, then it’s highly recommended.

6
The shallow plot and OTT violence may not be for everyone, but if it sounds like your thing you should try check it out.
LATEST REVIEWS