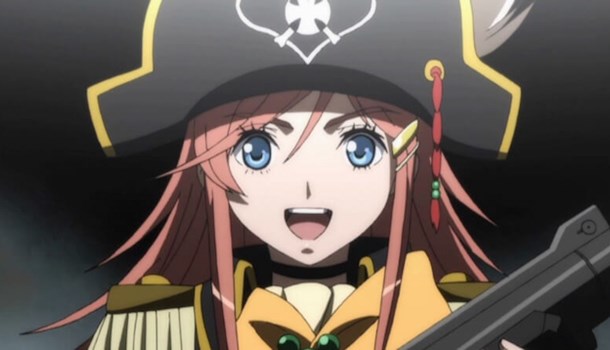 When the internet asked itself the question back in 2006, “Ninjas vs Pirates?” I always found myself edging towards the side of the privateers rather than that of the honourable servants. Although I was not into the whole swashbuckling and the "yo-ho-ho'ing" part of their lifestyle, I admired the fact that they were essentially free to express themselves, to pillage and plunder to their hearts content and that they got to look good while doing it.

When this spirit is combined with the wonders of futuristic technology that transcends the far reaches of space, well, that just sings to my soul as a full-on science fiction nerd and a former Trekkie. Also add the fact that one of my all time favourite anime characters is the Space Pirate Ryoko from the Tenchi Muyo OVAs, and you can pretty much assume that anything which involves the words “space” and “pirates” is relevant to my interests.

From the trailer and the series opening, Bodacious Space Pirates (also known as Moretsu Pirates) promises heaps of cute girls in skimpy uniforms (both militaristic and full-on pirate), epic space battles, a thumping sound track and spaceships which would make any science fiction aficionado weep with utter joy, all to the tune of what is best described as an electronic sea shanty.

Bodacious Space Pirates is, obviously, set in the distant future when humanity has expanded its reach into space under the leadership of a single imperial entity. Unfortunately, like most fictional galactic empires, peace and harmony never lasts and as the colonies founded by the children of Earth grew stronger, one by one they declared their independence and fought back against the rule of Earth with the help of independent spaceship operators acting as privateers. The civil war was fought, people inevitably died, the colonies became independent and the privateers either blended back into normal society or vanished altogether.  That is about as much as you will learn regarding the back story from the first four episodes, and from this alone I was hooked.

Marika Kato is a girl who is intelligent, decisive, beautiful, and frighteningly good when it comes to spatial perception and piloting. It’s almost as if she was a born natural and that these skills run in her family. Marika is also a member of her all-girl school’s yacht club, and with this series being set in the future, the yacht the school has access to just happens to be an archaic solar sail space ship. Life is rather simple for Marika and her school friends. She has a good job, good friends and a completely law abiding family... well, sort of.

Marika is, in fact, the only child of the captain of the pirate ship Bentenmaru and her mother, as are her close companions, are undercover crew members of this ship. This is all completely unknown to Marika of course, until her father dies and she is proclaimed to be the next captain of the Bentenmaru.

She obviously doesn’t jump right into the role, and in fact never actually makes the decision to dive into piracy during the first four episodes of the series. However, what she does come to realise is that becoming the captain will involve hard decisions, conflict, responsibility, huge laser cannons and scrutiny from all kinds of intergalactic low-lives. She also comes to see that any decision she does come to make will affect her life forever and it’s not one to take lightly. Will she become the captain of the Bentenmaru? Well, you won’t find out in the first four episodes, that’s for sure.

In fact, for a series about space pirates who happen to be bodacious (my, that is so early '90s...) the series actually starts rather slowly. This is not necessarily a bad thing in my opinion, as the opening to the series introduces us to a lot of the universe and what I assume is the supporting cast of the series. The first four episodes basically consist of Marika in a delicious maid outfit, Marika shooting old tanks with laser cannons with her mother, electronic warfare of epic proportions and the yacht club’s school trip on the solar sail ship Odette 2 (which they come to realise is a former pirate vessel, and very combat capable) to the nearby star of Tau Ceti. Up to now, there are few mentions of pirates, no pew-pewing of laser cannons in space, and little to no fanservice of any kind (other than high school girls in tight space suits of course).

So, why should you, the reader, actually sit down and watch Bodacious Space Pirates?

I for one, want to see where the series goes. There is immense promise for the characters, and both the story and the universe the series is set in is beautifully detailed. Hell, even the laws of physics are mostly followed (I have had some disagreements regarding how the solar sail ship navigates around a star, but it’s best not going into that level of detail to be honest). I am actually so impressed so far that it’s safe to say, even without the epic space battles, that I have not enjoyed anime science fiction like this since Planetes. I want to see where the story goes. I want to see how Marika takes on the responsibility of captaincy. Frankly, I want to see how this series delivers the epic space battles which have been promised.

As a final note, Bodacious Space Pirates is also gorgeous on Crunchyroll’s new 1080p stream (though a very fast web connection is advised) and is of course, best served with copious quantities of Sailor Jerry’s rum J.  Watch this space for a follow on review in 9 episodes time!

You can currently watch Bodacious Space Pirates in streaming form via Crunchyroll.