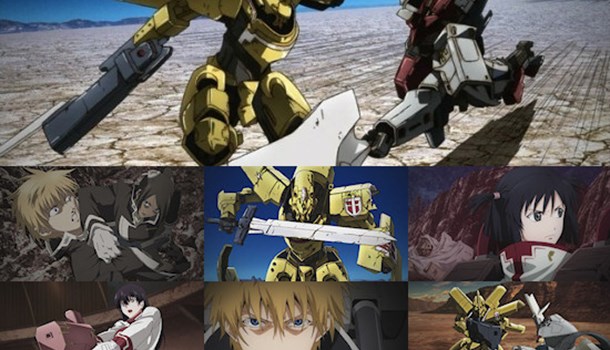 With a roar of gunfire and the clash of mecha, Broken Blade storms onto the scene as young pilot Kira Yamato is forced to take up the experimental unit known as GUNDAM to fight against his childhood frie....

You’ll have to forgive the Gundam Seed comparisons, but Broken Blade is an anime that wants to be Gundam. Desperately. Powerful mecha? Check. Massive array of characters most of whom will be bloodily killed off? Check. Teenage boy who has the ability after 5 minutes to kill trained soldiers? Well, close enough!

I’d like to say I was kidding in the first paragraph but the story here could easily have been written from the same design document as Seed. Rygart Arrow is a young man born into a world where everyone but his brother and himself have the ability to control quartz, which forms the basis of all technology.  He is summoned to the capital city by his childhood friend King Hodr, who wants him to look at an ancient golem that has been dug up from a mine which none of the military’s pilots have been able to activate - it simply doesn’t seem to work with their magic. You can probably tell where this is going by this point.

The story is not exactly the most original in the world and it’s sadly shot through with several rather oddly overlooked issues such as the fact that Rygart activates the golem... by pushing a button! Seriously, a huge team of scientists and soldiers never pushed the on switch? There’s also the fact that Broken Blade can’t quite seem to decide on who its target audience is - after you’ve been lulled into thinking that this is a fairly tame show aimed at a younger audience Queen Sigyn will take her clothes off, leaving the show two locks of hair away from being a successor to Queen’s Blade, or alternately someone will be killed very violently just off-camera. You end up wishing that they’d just gone for it, as a more mature tone would have gone a long way towards bringing back the drama that’s lost by the under-characterisation of most of the cast.

Don’t get me wrong though, despite all of this the series is pretty compelling. Told across six 50-minute episodes it flies through the story. The longer episode format will make you wish that every action show would follow suit, as it avoids the need for recaps and annoying cliff-hangers. At the same time though the series does feel a bit rushed, with the aforementioned lack of character development being particularly noticeable – one character who’s massively important just suddenly appears twenty minutes before the end of the final episode with no explanation at all of who they are!

The opening theme for this OVA, performed by Kokia, is a really nice piece of music and it’s a satisfying change to have such a delicate piece take the place of the more traditional pop/rock type openings that would normally go with this type of series.  Elsewhere I checked out both the English and Japanese dubs, watching each for half the series. The Japanese cast wins out here as the English dub is one of the most workmanlike I’ve heard, with the cast clearly just going through the motions. It seems there were some behind-the-scenes issues as well, as several characters are voiced by different actors in different episodes.

Animation-wise Broken Blade is again a bit of a mixed bag. The animation, as you’d expect from Production IG and Xebec, is top-notch with action sequences that are fast and visceral, and the mecha really have a sense of weight to them that only Evangelion has ever really nailed before. On the other hand the design work is very much hit and miss. The mecha all look very similar so it’s not unusual to forget who’s who once the bigger battles start, and the character design is skewed enough that our lead hero Rygart looks like a standard schoolboy but is revealed to be in his late 20’s!

Overall however, I do have to recommend Broken Blade. It’s an engaging story for all its shortcomings and it keeps you coming back for more. Not to mention that with the sheer amount of content you get for a pretty low price point, I doubt you’ll be disappointed!

7
An epic attempt that falls just short of being a classic.