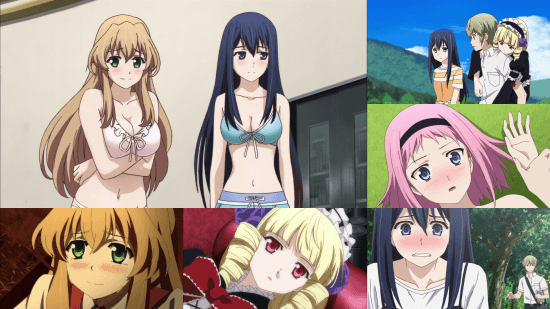 Brynhildr in the Darkness - Complete Collection

The topic of witches in anime falls into a spectrum of tragedy or comedy. On the one side you have the likes of Puella Magi Madoka Magica where being a witch is basically the end of your being and the start of your descent into energy devouring madness. On the other side of the coin you are leading a happy life, delivering bread. In the middle you are living a life where your duty is to protect the world while being groped by panty-wearing lolitas, while risking your life daily defeating aliens.

In the case of Brynhildr in the Darkness, which is still one of the stranger names for an anime I have seen recently, it has strong aspects of both. This series tries to combine the features of a harem comedy (many girls, one guy) with a tragic story. A similar tactic was played with Elfen Lied, which is the series that is most closely associated with Brynhildr in the Darkness, but I'd suggest that they are quite far apart - this is actually darker and more tragic, partially due to the sheer scale of the trauma involved.

The series starts innocently enough - with a boy, Ryouta Murakami; a girl, Kuroneko; a telescope and a theory about aliens visiting Earth. Unfortunately Kuroneko died in a tragic accident and Ryouta kept a watch out for aliens, eventually forming an astronomy club at school. However, Kuroneko reappears at school under the new name Kuroha Neko, and doesn’t remember anything. Considering she was a corpse, this isn’t exactly an unexpected outcome. Hell, if I met a corpse who said “Hi, we used to watch the stars together”, I’d be a bit freaked out. More to the point, I’d wonder how the hell she became reanimated and this is where the series becomes a bit dark. So imagine a room full of scientists, finding young girls (and they are young girls) in a morgue and implanting them with horrific technology that turns them into super powered witches capable of a range of powers. These witches are controlled by a drug that keeps them alive, but as the series progresses more and more of them escape into the wider world, suggesting that security clearly isn’t on top. I mean, when a paraplegic gothic lolita witch who predicts the future can escape, then I think it’s about time someone got the sack.

Ryouta, Kuroha and her aforementioned lolita friend Kana seems to attract a lot of attention as this laboratory comes to collect the devices implanted in their necks which give the witches their abilities. However, it doesn’t help when Ryouta’s own innate charm allows him to attract all of the witches coming to get Kuroha and Kana and turn them into allies. By allies, I mean they basically go full walrus and fancy the pants off him. This is where the tragedy becomes a harem comedy. And this is where the tragedy actually begins.

I am not joking when I say that I do enjoy a good harem comedy. I have hundreds of them. But, there is a time and a place for such things. I can however, see why there is a comparison between this show and Elfen Lied beyond sharing the same creator. That series too failed at delivering that fine balance between a good thriller - where your attention hinges on well delivered plot, suspense and at times terror - and the titillation of good dialogue, comedy and, let’s be honest here, fan service, which are the hallmarks of the harem genre. Neither Brynhildr nor Elfen Lied gets the balance right, but what they do both excel at is a disturbing level of gory action. Any series where the main driver for the story progression is the need for the witches to take drugs to prevent them from melting and dying once more is pretty gory, especially when they try and kill each other via more and more unusual methods. If the series continued like this and focused more on well scripted fights I would have been happier I think.

However, cue alien conspiracies and the death of the entire world, duplicate clones of witches, inexplicable abilities belonging to a certain lad and religious extremists and their enforcers, and you quickly find that the series begins to get heavily laden with plot that at times seems to be poorly conceived.

However, this doesn’t make it unwatchable. The series is well produced; the characters are well animated and designed, their abilities terrifying and their personalities and other aspects, are well fleshed out. On Blu-ray, the series actually looks quite looks gorgeous and clean. If you are going to see this series, then I think Blu-ray is the only way to go.

The voice acting in Japanese is excellent, and, let’s be fair, it’s more than watchable in English too. If you switch off your brain, which again you have to do if you are watching a harem anime, the series is actually enjoyable, but I do feel a bit disappointed that it didn’t meet my expectations. There were many opportunities for the hooks the series introduces that could have been developed further - the alien connection made stronger for instance. The pacing of the show is also odd - I can understand that the witches are weapons, but the ramping up of power levels so quickly made little sense within the storyline, leaving the series feeling jumbled.

Perhaps I am being unfair, but I did have high hopes for this series. So, if you want witches and a story that is well put together, go elsewhere, but if you want witches, drama, many bathing scenes and the groping of flat chested lasses, then Brynhildr in the Darkness is your series.

6
Not so much dark as incoherent.