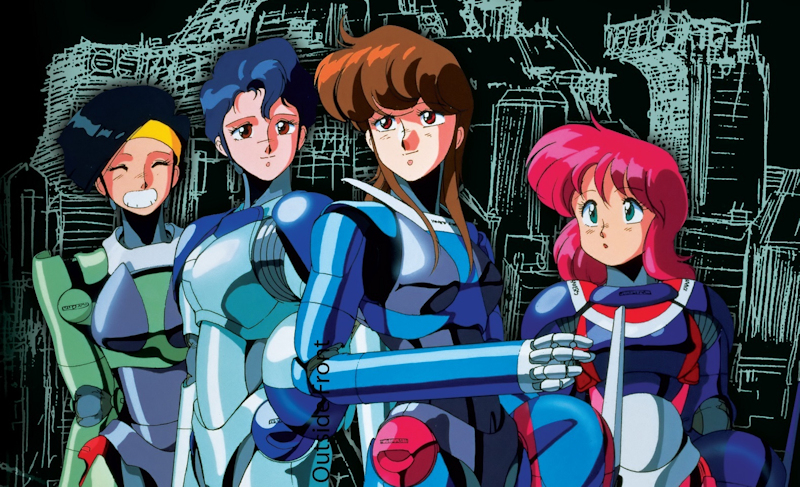 Set in 2032 and following a huge Earthquake, Mega- Tokyo is controlled by the ruthless Genom corporation and their android creations, the Boomers. The Boomers were created with the reconstruction of the city in mind, but are also used to replace mankind's involvement in mundane or dangerous tasks. As the series progresses, it seems that the machines are looking to replace us in other areas too...

The main protaganists are the Knight Sabers - four women in high tech, high heeled armour who are fighting back, clearing up rampaging boomers and striking out against the corporate control of the city. These women are; Sylia Stingray, daughter of the scientist responsible for creating the boomers, herslef the creator of the hard suits used to fight them. Linna Yamazaki, a strong willed gymnast with her eyes set on a corporate career, Nene Romanova, the cute, red haired young runaway who acts as a mole inside the AD Police and finally, the series central character, Priss Asigiri - rock singer, biker and all round tough gal with more than her fair share of tragedies haunting her.

I can't understate just how good this series is, and what a milestone in the UK anime scene it became. In the wake of Akira, it was Anime Projects, the original UK rights holders, not Manga Entertainment that provided the next high-octane cyberpunk thrills, and showed us that there was more to Japanese animation than sex, murder and demons. BubbleGum Crisis is intelligently scripted, leaves a lot of questions unanswered (in the best possible way) and provides us with some of the sharpest and most memorable pre-Evangelion mecha designs ever.

The series is driven by a pounding rock track, which was good enough to spawn two music video compilations. It would be fatal to dismiss this as a team-genre anime, as it's so much more. The arcs takes us through the lives of the members, and the series concentrates on character development as much as it does on the action quota. The earlier episodes are okay, but tape five (or arc 2 following MVM's set) that really pushes the direction, animation and mecha onto a higher level. The first time I saw it I was stunned, and even now I find myself smiling when I watch it because I know I've got a gem in a video-box.

10
Certainly improves in leaps and bounds in the latter 4 episodes, but even as a whole this is a mighty strong package.
COMMENT AND DISCUSS
blog comments powered by Disqus