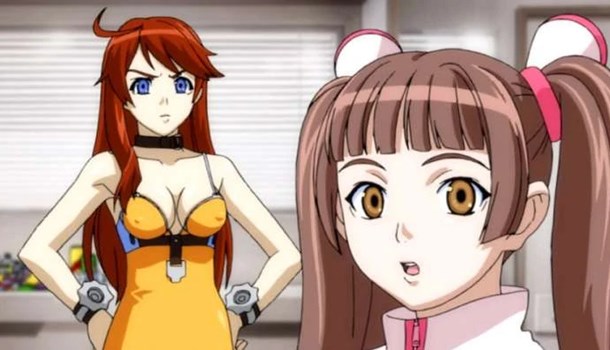 After having watched my way through the first five volumes of Burst Angel, I have to admit that it had managed to win the award presented to it in my head of "Most Average Anime of All Time".  I get the feeling I wasn't alone in that reaction, judging by the reviews from various members of the crew here over its span of releases - 'Weak' seemed to be one of the most commonly used words to describe the show, and personally I think it's a pretty apt one.  However, we have now reached the climatic DVD of the series, and those last few episodes are often where even the most mediocre of shows can pull a rabbit out of the hat and leave us with some fond memories or jaw-dropping moments.

In that vein, it's encouraging to see episode twenty-one, the opener for volume six, kick things off with a bang - Quite literally, courtesy of a vicious terrorist attack on a government building, which sets the scene for the status quo in these final episodes.  The political manoeuvrings instigated as a result of this attack sees the Burst Angel team disbanded, although needless to say that doesn’t last long, with Jo called into action one more time to battle a monster in the subway system.

Which is more or less where the mediocrity kicks right back into life once again.  From here on in, we find ourselves being built up (albeit rather clumsily more often than not) to a big set-piece moment or action sequence, only to find that it utterly fails to engage or excite.  During the course of these final four episodes, we reach two or three major show-downs, all of which with plenty of potential, but each and every one turns into nothing more than a damp squib.  Worst of the lot (and a perfect example of the malaise which affects the series) is one of the stand-offs between Jo and arch-rival Maria.  Two skilled combatants with mechas fighting for their sense of pride and their life should be an intense ballet of gunplay, bravery and movement, right?  Not when it's done Burst Angel style – Instead, the climax of this 'epic' battle involves the two protagonists standing still and shooting at one another from point-blank range until they both run out of ammunition.  Honestly, I'm not making this up - It's classy stuff.

This whole scenario isn't helped by the fact that it's really quite difficult to care about any of the major characters, largely because none of them seem to have learned anything from the experiences we've shared with them - Jo remains, to all intents and purposes, a heartless killer, Meg is still whiny and holds a place in the Guinness Book of World Records for Most Times Kidnapped, and so on.  It's tough to build an emotional and tense climax to a series when you're working with such two-dimensional characters.  I wanted to care about these people, I really did, but I just couldn't be drawn into their circumstances.  Couple that with the often lacklustre animation and slightly stilted dialogue, and... Well, you're back to that "Most Average Anime" award once again.

So, there you have it – The end of Burst Angel.  So many moments of promise, almost all wasted without a second glance.  I mentioned in my review of volume five that the show's one redeeming quality is that it's a series you can watch with your brain parked in neutral, and that certainly still stands in these final episodes.  That still isn't enough to make it purchase-worthy though I'm afraid.

The good news is that if you do like Bakuretsu Tenshi, then as per the other volumes of the show there are extras aplenty for you to feast your eyes on.  As well as the standard fare of both English and Japanese 5.1 surround language tracks alongside English subtitles (with subtitled signs as well), you're also treated to an audio commentary of the show's final episode attended by all four of the leading female voice actors from the US dub, a number of radio plays in Japanese with English subtitles, a Japanese trailer for the series (which makes it look far cooler than it actually transpired to be) and a set of alternate opening and closing credits.

5
Even the climax of this weak series ends up as an anti-climax.
LATEST REVIEWS