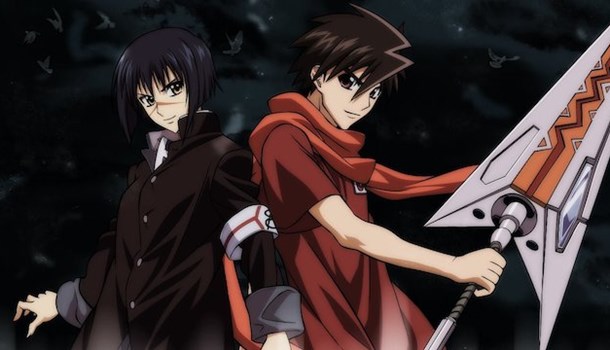 If I mention that Buso Renkin is based on a Shounen Jump manga, then that's probably about as far as I need to go by way of an explanation of what this series is all about for many of you.  However, if you're still in the dark then let me expound a little on the basic properties of a series of this kind - Normal guy, usually a high school student, suddenly thrust into a strange and unfamiliar situation where he must learn to fight both for his own life and those who he cares about around him.

Unsurprisingly, Buso Renkin fits that bill perfectly, introducing us to Muto Kazuki, a young man whose misadventure and attempt to help what he believes is a girl in trouble gets him killed within about a minute of the series starting.  Rather than aim for the world record for the shortest anime ever, the series doesn't end there, as that 'helpless girl' turns out to be Tokiko Tsumura, an alchemy warrior with the handy ability to replace Muto's heart with a kakugane, a device which can be used to create an alchemical weapon (the Buso Renkin of the show's title).

This new lease of life and the powers it grants Muto end up dragging him into the struggle between the alchemy warriors and their enemy, the human-eating homunculi - As the series progresses he finds himself becoming ever-more powerful while also facing up to increasingly strong enemies, starting out with a guy who could give Elton John and Dame Edna Everage a run for their money in the stupid glasses stakes while also holding the disturbing habits of running around wearing only a thong and pulling useful items out of his crotch.  There isn't really a lot I can say about this aside from "The goggles, they do nothing!".  Throw in a sister and friends for Muto to protect, and you pretty much get the picture.

If there's one thing to be said about this first volume of Buso Renkin on DVD it's that it's good value for money, with this release featuring no less than three discs and spanning entirely half the series (thirteen episodes).  Throw in a couple of half-decent extras, and you have yourself a good few hours of entertainment at your disposal.

Looking at this series in isolation, there really isn't all that much to complain about - The action quotient is pretty bang on the mark, the emotional aspects of the show add some extra frisson to proceedings, and if you don't mind some massively larger than life enemies then you'll feel right at home with Buso Renkin.  The problem is, this isn't the only show of this ilk by a long way, and once you start comparing it to similar series such as Naruto, Bleach, and even the likes of Shana, the whole thing starts to fall a little flat.  The lead characters are okay without ever dragging you in to either their excitement or emotional turmoil in any truly tangible way, while those overblown baddies soon start to become old hat, and downright irritating in some cases.  I can't even say that the series is an exercise in style over substance, as even artistically its animation quality is average at best.

Once you start peeling away those layers, you're left with a series that feels incredibly generic, and thus incredibly average by proxy.  While it may be passable as a way to while away the hours, if you're looking for an action-packed series there are many other anime shows that can give you that fix and do it far, far better than Buso Renkin ever succeeds in achieving.  It would be overblown of me to call this series one to avoid, but stand it up against Bleach and Naruto and it simply pales in comparison.

6
Not a bad series in its own right, but it fails miserably to live up to the standard set by the
LATEST REVIEWS