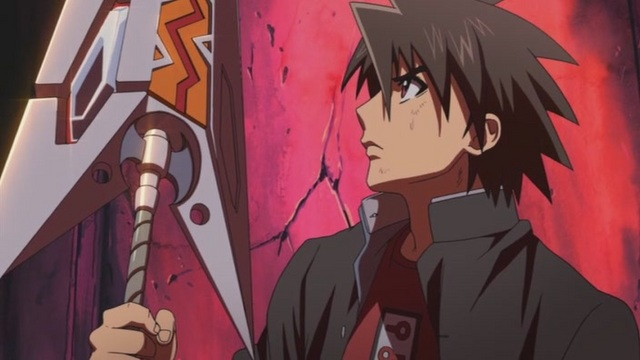 Having watched the first half of Buso Renkin courtesy of volume one of this series on DVD, "average" was pretty much the only word I could conjure up to describe it - While it proved to be technically competent in both animation and story-telling terms and arguably fun in its own way, it didn't really have any "heart" to speak of, nothing to make you sit up and really take notice or embroil you in the plights and fights of the main characters.

This isn't usually the kind of thing that gets fixed half-way through a series, but to be fair Buso Renkin at least has a fairly decent stab at it in the hefty slice of thirteen episodes that is volume two.  The first volume left us with a crisis at Muto Kazuki's school, where Dr. Butterfly was attempting to unleash a new and terrifying being upon the world, known only as Victor, and volume two takes us straight back to that vitally important battle between Kazuki, Tokiko and Victor - A conflict that sees Kazuki get "levelled up", a series of events that proves to be literally life-changing for the young lad, turning friend against friend and putting both himself and others at great risk.

Against this new backdrop of real urgency, the second half of Buso Renkin really ramps up the action quotient substantially, making for an almost non-stop series of scraps and battles for much of the episodes on show here.  This actually serves the show in reasonably good stead, keeping things moving at a decent pace and keeping your mind on the action rather than the subtleties of the plot, which when you sit down and start thinking about said plot is actually a good thing.  Now, I can hardly talk about realism with a straight face when it's regarding a series about alchemist warriors that magic up crazy weapons from fancy chunks of metal, but there were moments (particular in the final episodes) where my eyebrows were raised so far that I was in serious danger of damaging my face - Even I can only suspend disbelief so far.

The fact that the series seems to take itself so seriously much of the time doesn't particularly help either given the occasionally ludicrous attacks, and more importantly attack names, provided to certain characters.  I have to salute the Japanese voice actor frequently handed the line "KILLER RABIES!" both for delivering it without curling up into a ball laughing and for shouting it out with such gusto.  Sadly, I wasn't quite so composed, and ended up giggling like a schoolgirl every time it was uttered (and it seemed like a lot).

Having said all that, I can't really deny that Buso Renkin continues to be reasonably fun to watch and actually bolsters that enjoyment with both its barrage of action and some later episodes where we actually start to feel a little empathy with the two main characters.  It's a bit of a shame that those elements appeared entirely too late to really make something of the series, meaning that it remains some distance behind the more notable occupants of this genre such as Bleach and Naruto.  Mind you, at least with its twenty-six episode length it isn't liable to break your bank account like the aforementioned shows, which makes it something of a bargain if you need a dose of mindless (and slightly daft) action.

English and Japanese audio, English subtitles, "Behind the Scenes" feature.

6
An entertaining series in its own, weird way, but hardly a poster boy for the genre it represents.
COMMENT AND DISCUSS
blog comments powered by Disqus