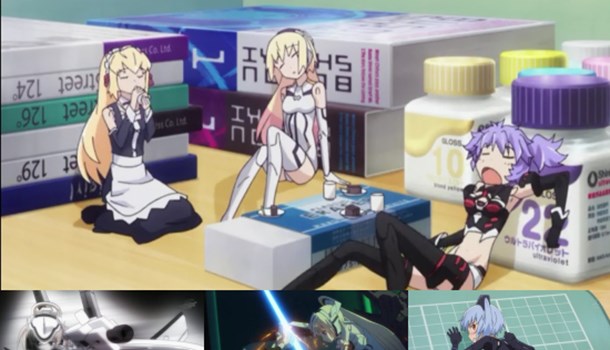 Do you remember a certain little show from 2001 called Angelic Layer? Well, prepare for a distinct flavour of deja vu, because Busou Shinki is essentially Angelic Layer all over again - but about ten times worse.

Based on a series of real-life action figure toys, Busou Shinki’s origins set alarm bells ringing from the off - after all, if you thought crafting a decent narrative and characterisation out of a pay-to-win mobile game was hard enough, then what about a set of customisable plastic dolls?

The anime’s foundations are shaky to say the least - dull-as-dishwater high-schooler Rihito has nabbed himself four of these pint-sized Busou Shinki dolls. But unlike the real-life action figures, these miniature lasses can actually speak and move by themselves, and turn out to be only too eager to please ‘Master’ Rihito in any way possible. Like Angelic Layer these customisable "battle girls" can fight each other, but much like that other CLAMP series Chobits, or Peach Pit’s Rozen Maiden, what we actually end up getting for the most part is an endless series of everyday occurrences as the dolls try to get to grips with living in the world of humans.

While there’s a certain novelty in this Toy Story-alike depiction of tiny toys interacting with a world that - to them - is constantly larger than life, it’s fair to say that very little of real gravity happens for the bulk of the show. The first episode literally centres around the girls trying to retrieve a letter that accidentally gets blown out of the window and into a park.

In the next episode, they chase a mouse around and then try and work out how they're going to cook a meal for their master when most of the ingredients are bigger than they are. But, oh no! One of the ingredients the girls are planning on cooking - an octopus - has got loose, affording us an icky scene of tentacular titillation, complete with oozing fluids. Here we see one of the show’s many crude stabs at fan-service - but unfortunately, this isn’t even one of the worst examples.

After a bit of rough and tumble, one of the girls has chafed some of her paint-job off - as might happen to a toy in real life. But can you guess which part of her body is now exposed as bare plastic? That’s right - ‘Master’ Rihito quickly takes paintbrush-to-butt and touches her up, in all senses of the phrase. Worse is yet to come - a bath house scene (because, of course, there has to be a bath house scene) has one of the girls proclaiming loudly: “It is only right and decent for a lady to keep clean clear down to her screw holes.” Urgh.

For the most part, watching Busou Shinki feels actively uncomfortable - an insipid conveyor belt of brain-rotting nothingness that’s either a whole bunch of the girls talking about not much much in particular, or running through a series of box-ticking stereotypes that seem to offer up confirmation of everything that people that don't watch anime think anime is.

All of this might be mildly tolerable if the show at least looked good - but the trouble is, it doesn’t. The chief fault lies with the abominable character designs; in a stab at offering a true-to-life representation of the existing action figures, the core cast of girls are drawn covered in sockets and plugs, like a LEGO figure. But this nod to accuracy ends ends up having the unfortunate side-effect of making all the girls look like they have some kind of horrific, lumpy skin condition.

The effect becomes almost laughable when the show makes another luke-warm attempt at fan service - casting a roving eye over one of the girls’ bodies as she wakes up. "Look at her joints stretch and move..." the show seems to be telling us, "isn’t that sexy?" But we’re left feeling only further alienated from these interchangeable pocket-sized moppets.

It’s a shame the characters are so haphazardly handled, because when the show’s fight scenes finally come, they’re actually competently handled - with lots of motion, a decent blend of CG elements, and a sense of style that draws heavily from Infinite Stratos’ similar brand of mech-suited bust-ups (no surprises there - both shows were produced by Studio 8-Bit). We received the show on DVD, and as things speed up, there’s a slight blurring during some of these busier action moments - but we suspect these look smooth and crisp on the Blu-ray transfer.

When it comes to audio options, your only choice is the original Japanese with English subtitles. It’s unfortunate, as the show might actually have benefitted from the breeziness of an English dub - something to pop on as background entertainment while you do something else. Instead, you’re left to read through the banal dialogue in agonising detail - further marred by subtitles that are arguably stilted and overly literal on numerous occasions. In terms of extras, you’re offered a spread of trailers for other Sentai Filmworks titles, disc credits and Japanese promos, as well as clean openings and closings.

At its worst, watching Busou Shinki feels like an actual insult to your intelligence as a viewer - your brain slowly rotting away as you sit through yet another variation on the show’s crude mix of banal antics and un-sexy fan service. But the saddest thing is that Busou Shinki never even descends into so-bad-it's-good territory - it just maintains a constant, stable level of unerring, utter mediocrity.

4
Cheap, ugly and inconsequential - Busou Shinki is a bargain basement exercise in all of anime's laziest tropes.
LATEST REVIEWS