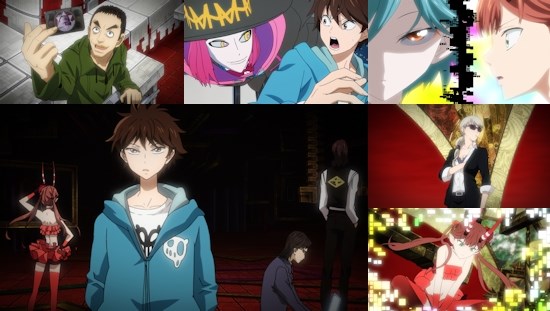 As the song so succinctly states, "money makes the world go around" - while not literally true, figuratively speaking money is a constant obsession in all of our lives, and understandably so when it can have such a huge impact upon our lives.  As recent years have proved, even economic decisions thousands of miles away from our personal lives can directly affect our own quality of life, and as a result our relationship with those who make the decisions and influential the financial markets at the heart of business and economies has never been more fraught.

Thus, the time is right to cast a critical eye over such systems, and what better way to do so than by... errr... mixing discussion of the global financial systems with something not entirely dissimilar to Yu-Gi-Oh?  Okay, so maybe that doesn't seem like the most obvious way to discuss economics (but then again, neither is using a medieval wolf girl and that turned out alright), but it is nonetheless the path trodden by C - Control, a series originally aired on Fuji Television's noitaminA programming block and now brought to the UK on DVD by MVM Entertainment.

We're introduced to the show's concept by Yoga Kimimaro, a hard-working economics student at university who is no wannabe fat cat - all he wants is to live a simple life where he has enough money to get by and provide for his family in the future.  These unremarkable dreams of his future seem to make Kimimaro an unlikely candidate to be invited into the so-called Financial District, but for some reason the strange, ethereal joker-cum-banker named Masakaki has chosen him for just such a role, shuttling him to a strange world where Entrepreneurs take part in "Deals" - battles conducted using powers wielded by creatures known as Assets, all of which are funded by said Entrepreneur's finances.

Painful though they may be, these "Deals" aren't quite life or death battles as no lives are directly lost amongst those participating.  However, bankruptcy as a result of a lost Deal can have a marked impact upon real-life, as these Entrepreneurs are literally putting their own futures on the line as collateral, and the loss of all of your money in the Financial District can have deleterious results on not just those directly around the defeated, but also upon entire nations and their own finances.

As Kimimaro tries to take in this wealth of information, he also meets an Entrepreneur determined to minimise the impact of the Financial District upon the real world - an influential businessman named Mikuni Souichirou who has no shortage of money and power to throw around.  Why Mikuni takes such an interest in Kimimaro and his Asset Mashyu is unclear, but are Souichirou's plans really in the best interests of Japan and the world's futures, or are they merely a short-sighted and self-centred folly?

You certainly can't fault C for its ambition - creating a mature and considered take on capitalism and modern-day financial systems, and more importantly making it interesting, is a big ask and in fairness to the series is manages to weave its core premise of an elite few making decisions which can effect entire nations or even the globe in a thought-provoking way that brings home the prospect that your life could be altered by someone who has never met you in an occasionally chilling way.

The series also has plenty of visual flair to aid in this quest - the Financial District is suitably moored between the real and surreal and the mechanics which tie the real world to the Financial District are really rather smart from its depiction of dual currencies through to the way Entrepreneurs interact with their Assets and the world in which they reside.  Add in another fantastic soundtrack from Taku Iwasaki (who has more recently been making waves with his work on Gatchaman Crowds), and you have a series that is engaging in both sight and sound, undermined only slightly by some ropey character CG that crops up from time to time.

The trouble is, such is the extent that C engages your brain that your critical thinking starts to kick in and holes start to appear within the series.  Perhaps the show's biggest issue is one of characterisation - what should be an interest cast are undermined by the fact that all of them incessantly talk about money and little else right the way through to Kimimaro himself, which seems to go against his assertions that money isn't important to him.  For a series that is clearly trying to suggest that happiness and a bright future for humanity is more important than making profit, this is a pretty major oversight that detracts from some of the human aspects of the show's commentary.  The same can also be said of the heavy-handed nature in which the series demonises the Financial District and its goals - when battle counters start out at 666 seconds, you're probably trying a little too hard to make a point!

With some of its battles also proving to be unsatisfying, and an ending that doesn't live up to the aftermath of the show's final conflict, there's simply too much that doesn't work here to the point where it threatens to outweigh a lot of the good concepts within the series - this leaves us with a series that is brave in its concepts, but not quite up to scratch in its execution.  It would be harsh to call it a failure, but it certainly isn't the success that it clearly aspires to be.

Even without a Blu-Ray release, the presentation of this MVM Entertainment release is solid - it looks pretty decent, and the show's English dub does a passable job that leaves us no cause for complaint - in spite of its flaws it's good to see the series make it to the UK in physical form (having previously streamed via Anime on Demand), as you won't find many modern anime series having a crack at some of the biggest global talking points in recent years all that often.

With that in mind, if you're looking for a series that is thought-provoking and topical, then C - Control is most certainly that series - just be prepared for a viewing experience that won't entertain you as expertly as it distils its commentary on the excesses of modern-day capitalism.

English 5.1 and Japanese stereo audio with English subtitles.  Extras include English cast commentaries for episodes five and eleven, clean opening and ending credits, and a US trailer.

6
This series has a fascinating premise and plenty to say about its subject matter, which makes its inability to deliver some of these talking points in a satisfying manner all the more frustrating.
LATEST REVIEWS