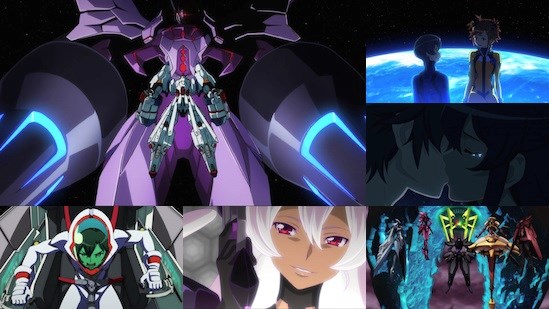 When we last left the cast of Captain Earth things felt like they’d only just begun. After an introduction to the characters through a barrage of terminology, things moved into an episodic quest as the Planetary Gears rounded up the rest of their members. The second half (the set itself comprised of episodes 14-25) opens with the arrival of their leader, and it’s now time for the show to start going places. Now that the gang is back together the Planetary Gears go on the offensive, blissfully unaware that there is a third party playing all sides with their own secret intentions. Meanwhile, Globe have other problems too as the Salty Dog make their own moves in order to kidnap Hana. Romances will blossom before the the Midsummers’ Knights confront the Gears for their final battle at their mothership orbiting Uranus.

Although this is technically the point where Captain Earth starts shifting the story into high gear, the places these episodes take it in are sometimes rather questionable. Once the Planetary Gears have achieved their big reunion and a few other of the shows’ lingering mysteries (such as what exactly Hana is) have been revealed, the alien threat seems to take something of a back seat to the conflict between Globe and Salty Dog. One side believes the answer is to fight back against the Gears, while the other would rather flee the Earth with a chosen few and leave the rest of humanity to their fate. Their relationship often feels like a watered down version of NERV and SEELE in Neon Genesis Evangelion - which goes to show Captain Earth is taking more inspiration from that series than just child pilots in colourful jumpsuits. While this side of the plot is only difficult to follow if you can’t remember all that terminology the show stressed so hard in the earlier episodes (and even then the individual episodes roughly amount to things like “Hana gets kidnapped”), it just isn’t that interesting to follow.

Meanwhile this is also where Pac, a supercomputer owned by the Macbeth Enterprises and secretly in allegiance with the Planetary Gears, starts pursuing his own agenda - by taking over a body and becoming a serial womaniser. Of course there is more to it than that, but Pac in general feels like a tertiary storyline at best - which is exactly why him suddenly coming out as the big bad at the very end is such a huge slap in the face. As soon as the Gears are gathered together they’re set to one side in favour of pursuing Salty Dog further, and then they have their big finale taken from under their noses as well. Adding Pac in as something of a wild card does make things feel a little less predictable in their development, but its baffling why the villains that were actually somewhat developed are snubbed at the final hurdle. They put up a great fight in the penultimate episode, and then are cast aside like they’re nothing in the finale.

On the plus side, the robot action has been turned up a notch this time around. Just to add another diet Evangelion comparison to the mix, a third giant robot is added to the mix in the form of Hana’s red Flare Engine. This adds a new element to the more abundant space battles, which now have more variety at their disposal thanks to the additions on both sides. On top of that, the show throws in some other interesting locations, particularly when the Midsummers’ Knights get stranded in the desert with Salty Dog hunting them down. Even if doesn’t go in such a great direction plot wise, the final fight at Uranus looks absolutely gorgeous, pushing the show’s visuals to the very limits and making sure it goes out with a bang in at least that respect.

The characters themselves are still just as fun to watch too, even if their development starts to come across as a little stunted. Teppei’s status as a former Planetary Gear seems to have lost all relevance, while Daichi remains a stereotypical protagonist with no notable flaws. Akari is just as fun as ever, but her growing romance with Teppei feels tacked on and only there because the other two characters have been paired off. Hana is the only one that really benefits from this set of episodes, as she starts to feel less like a plot device and more like a capable character in her own right.

Captain Earth turned out to be an odd little series. The first half of the series was enjoyable but didn’t feel like it had gone anywhere, but then once it started going places it began to really suffer. As a whole it’s a bad offering from BONES, but they can and certainly have done a lot better. Captain Earth tried to recapture the sort of coming of age story that Eureka Seven and Star Driver had - but lacks the charm of the former and the uniqueness of the latter. At the very least this show looks good, and thankfully that’s an area BONES will rarely fall short in.