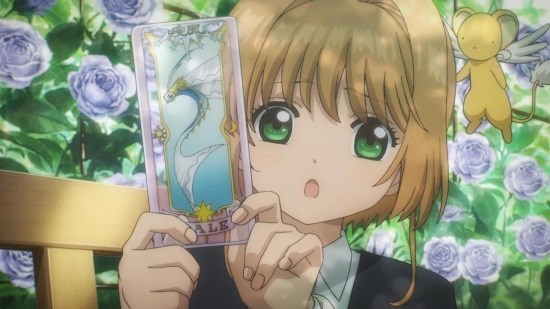 Has it really been 22 weeks already? Wow, time really does fly doesn’t it? It seems like only yesterday that Cardcaptor Sakura: Clear Card started airing and brought us the first adventures of Sakura and her friends in twenty years. But now the series has reached its conclusion and left us with one question in particular – did it, can it, stand up proudly alongside what’s come before?

Sakura and her friends have finally graduated from elementary school but the world isn’t going to stop turning up new problems just for that! After a terrifying dream Sakura wakes to find that the Sakura Cards have turned clear and the magical key that unlocks her powers has changed forms. A whole new slew of magical problems is hitting the city and if the Cardcaptor can’t deal with them then who else can? Perhaps the newly returned from Hong Kong, Syaoran can, or maybe the mysterious new transfer girl Akiho could help out? If nothing else at least Kero will always be on her side!

To get this out of the way up front: no, Clear Card is not as good as the original series. The new cards are all derivative of the original ones making them rather less interesting and the overarching plot really doesn’t deliver as it barely even registers for most of the episodes and never really gets going until the end of the series. The original show had a fairly episodic structure too of course but everything felt much more connected with a clear reasoning behind what was going on.

Sakura’s relationship with Syaoran has been brought to the fore here and still doesn’t really work. It’s supposed to be a sweet, innocent relationship but it never really worked all that well in either the original show or in Tsubasa Reservoir Chronicle and doesn’t get any better here where it serves to pad out run time more than anything else.

There are also some very odd continuity issues – the OVA that launched the series felt pretty clear in that it was acting as a replacement for both the last episode of the original show and the second movie but then later events in the series show The Sealed Card to still be canon? It’s also very disappointing that Sakura, Kero and Yue seem to utterly stop caring about the missing Sakura Cards within about 3 episodes despite the previous series stating that the cards were all sentient and loved Sakura as much as she them. You’d have thought that this would form a major plot point throughout the show rather than just dumping them in a metaphorical drawer somewhere and forgetting about them!

Having said all that though, this is still a great series. The characters are as wonderful and lovable as ever. Sakura remains utterly adorable and rarely puts a foot wrong character-wise and her partner Kero is still the brash, Osakan lion that he’s always been. Almost every character from the original show gets a look-in including a triumphant return for anime-original character Meiling whose episodes are the highlight of the show. Whilst the plot may meander, the characters generally don’t and it’s fun to watch the gang go about their lives interrupted only by new magical entities and by Yamazaki’s new lies which continue to fool Sakura to this day.

The technical side of the show is an utter triumph. The show looks amazing with smooth animation, wonderful colouring and as always, spectacular costume designs in many episodes as Tomoyo will likely never give up on her hobby of using Sakura as a giant dress-up doll! Given that the original series was all done in cel animation (I should know as one of them hangs on my wall!) it’s truly impressive just how well the look of the series has been captured. Sure there are a few modern updates here and there but it would have been hard to get much closer and the show truly shines visually unlike a certain other magical girl revival show of recent years.

It’s all tied together by the spectacular voice cast who return one and all to bring the series characters to life once more. Special shout outs of course going to Sakura Tange as Sakura and Yukana Nogami as Meiling who deliver stand out performances here. On the dub front the story is a bit different as the characters are on their third set of English actors. Whilst things are serviceable here it’s not great either and the Japanese voices are what’ll make you fall in love with these characters all over again.

All in all, this is a solid, fun show whose flaws cannot quite be fully forgiven by its successes. Not to mention the fact that it ends on a massive cliff-hanger with a second season not having been announced at time of writing! Your mileage here, as with any sequel series is going to depend on your love for the series as a whole and the bigger fans will get a lot out of the show although it is a shame that new fans may not quite get what they need from this to be hooked in. Perhaps a certain UK distributor will be able to resolve that issue by bringing out the original show sooner than later.

8
CLAMP's biggest star takes the stage again - and she's still got it!