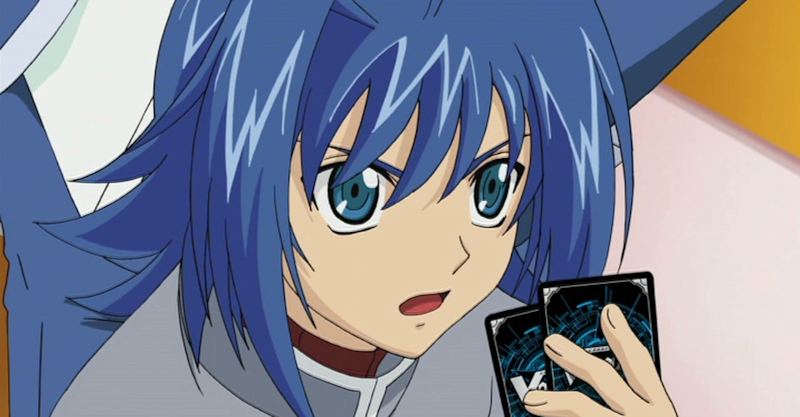 Cardfight!! Vanguard tells the tale of one Aichi Sendou, a wannabe cardfighter for the planet's most popular CCG. So prestigious is the game that huge tournaments are fought utilising the latest 3D projection hardware - calling a card will unleash a terrible CGI beast with ravishing attacks in stadiums filled to capacity. However, Aichi is only just starting out, so he plays at his local haunt on a simple card table. But does greatness await?

Cardfight!! Vanguard is the latest in a long line of cartoons aimed to sell products to children. As a child of the 80's (when the US lifted its ban on cartoons featuring toys) I was bombarded with the likes of He-Man, Transformers and Care Bears, but it wasn't until the 90's that I realised that the origin for many of these shows was in fact Japan, where the phenomenon was an art form. Most notable of the Japanese shows in the West was arguably Pokemon, a series designed to sell games and merchandise that achieved massive success in the West. And Pokemon has much in common with Cardfight!! Vanguard.

A young man with a group of friends train to improve their skills and fight in tournaments, which should of course be quite run-of-the-mill, but somehow CV manages to be both charming and quite engaging. Admittedly, sometimes it's unintentionally hilarious for the wrong reasons, but we'll get to that.

The show streams free of charge on Bushiroad's Youtube Channel. The animation is the usual workmanlike made-for-TV quality, but the English dub is surprisingly good. Aichi himself is a little too earnest at times, but he's countered nicely by the rest of the (actually quite large) group of supporting characters. My particular favourite is the often-sarcastic Miwa, friend to Aichi's idol, Kai. Miwa is clever, witty and actually quite cutting, with Jonathan Lachlan-Stewart putting in a great performance, striking a balance between friendly, outgoing, and sly. He's certainly a great break from the more angsty Kai and shop assistant Tokura, who could suck the life out of any room they walk into.

Now, on to the good stuff, the silly things that make the series delightfully quirky. One of these is the music; it's all clearly sung by Japanese artists, mostly in slightly-awkward but very endearing English. This is fine for the most part, but when Vanguard idol group "Ultra Rare" (snigger) aren't singing, they're (in order) sassy, well-spoken and very tween American. When they start singing, it reverts to the Japanese-English performers, and it just sounds nothing like them. It is, however, incredibly funny, and I wouldn't change it for the world. I'd go to their concerts if they introduced each song before singing it.

Another bizarre turn is when one of the young teen antagonists is so engrossed with his Vanguard skills that he builds a skyscraper and fills it with scientists to observe fighting techniques and "take over the world, one person at a time". Even in the context of the show it stretches credibility somewhat as there are no cash prizes, so God only knows how he funds all this, but actually trying to make sense of this bizarre plot point had me in stitches with friends, so I actually quite admire it for it's blatant insanity.

There are also times when the series loses any pretence of entertaining you and goes straight for the hard sell - the way in which booster packs are greeted verges on the religious, and the way the script describes each of the starter-sets as "created with love" can pull you out of the story completely.

Finally, there are the lovely fourth-wall breaking moments. The shop manager humming the theme tune while driving (I love it when characters do that, I don't know why) and one character taking another to task for saying "yo" after every sentence just complete a series that understands it's own purpose and likes to play with it a bit.

All things considered though, I've made it through 76 episodes of Cardfight!! Vanguard so far, and I've found myself slightly addicted. The stories are well-crafted, the characters bright & lively, and the increasing epicness of the battles is genuinely stirring at times.

Having read Elliot's own review, I can see his points - the series is slow to start, it's blatantly an advert and it won't win any prizes for originality or plotting, but it's a show aimed at kids, and you can't really get into it through 3 episodes. The main character does grow a spine, and I certainly prefer his archetype to cretinous Naruto.

If you have an afternoon to spare, give it a watch - you'll feel like a kid again, and if it really works you'll be firing up a browser to get hold of some decks :)

You can watch Cardfight Vanguard on the official Bushiroad channel.

7
Gloriously opportunistic marketing aimed at kids, with enough charm and wit to keep you watching. Evil, but the best kind of evil.
COMMENT AND DISCUSS
blog comments powered by Disqus