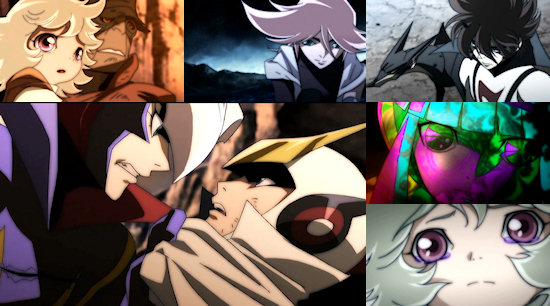 The first half of Casshern Sins certainly marked it out as a unique series in both outlook and visuals, with a simple yet occasionally beautiful aesthetic that served only to accentuate the depression of a world on the brink of destruction depicted by the show's main story.

Little has changed along those lines as we enter the second half of the series, although there is at least a glimmer of hope to break the seemingly endless travails and suffering brought about by the so-called "Ruin", in the form of growing rumours that Luna is still alive and healing those whose lives are literally disintegrating before their eyes.  Thus, we follow Casshern on his search for the light of the world he was previously believed to have killed, accompanied by Lyuze and punctuated by frequent (and ever-more pertinent) meeting with Ohji and Ringo along the way.

It's one such meeting that quickly brings about some more exposition to keep the second half of the series moving, with an encounter between this group and Casshern's former employer, Braiking Boss, which reveals much about our immortal protagonist's origins and initial raison d'être - a revelation that also sheds light on Dio and (more importantly) Leda's lives and what drives them.

This additional layer of agony piled atop Casshern's already heavily-burdened shoulders isn't even the last of the hardships he has to face - the truth behind Luna isn't as rosy as it first seems, while seeing those who he has become close to begin to crumble and fall to the Ruin becomes all the harder to bear as a result, pushing Casshern towards desiring his own death despite its seeming impossibility as questions surrounding the meaning of both his own life and those around him swirl almost impenetrably.  It isn't only Casshern who has personal demons and dilemmas to tackle however, as Lyuze also finds herself torn between a desire for vengeance against Casshern and a growing affection towards him which finds a large focus within many of the episodes on show across the three discs in this release.

If all of this sounds like pretty tough going, then you'd be right - if Casshern Sins' first half seemed relentlessly depressing, its second half is geared to find its way into your head to ask the big questions about life, mostly manifesting it as a simple "what's the point?"  It isn't the kind of thing you want to watch after a bad day at work or a row with your girlfriend, that's for sure.  Still, as the series progresses so its key tenets are slowly and carefully revealed as it waxes lyrical about what it is to be alive, or more importantly what makes being alive something special and precious.  This isn't always achieved as succinctly as one might like (Luna's motivations in particular aren't so much muddy as just plain muddled), and it occasionally borders on the downright preachy, but it still makes for some thought-provoking fare that isn't afraid to keep up its downbeat tempo when it would have been tempting to take the easy route out and formulate a happy ending that would only have served to undermine everything that went before it.

As with the first half of the series, and despite the likelihood that the UK won't get to enjoy this second half on Blu-Ray, Casshern Sins stands out on account of its unusual visual treatment - at times overly simplistic yet often mutedly beautiful because of that, the show's simple visuals again offer up some fluid and dynamic action scenes while putting its aesthetic to great use in depicting its bleak world broken up by the occasional cornucopia of colour.  Even without a High Definition treatment the series still looks great on DVD, with arguably one of the better DVD transfers I've seen on a UK anime release in recent times.

The best exhibit of the close synergy between animation style and story-telling comes courtesy of an episode which focuses almost solely on Lyuze, and more specifically the inner workings of her mind as her dreams see her turning her relationship with Casshern over and over in her head.  It makes for a surreal and multi-layered experience that is impressive in its own right, but it would be nowhere near as eye-catching without those visuals to back it up.

It's moments like these that the make the whole Casshern Sins experience feel worthwhile - there perhaps aren't enough of these moments scattered throughout the series, but there are undoubtedly times when the show (and this second half specifically) strikes you visually or mentally in a way that will either make you catch your breath or engage you deep in thought.  It's a satisfying feeling when it happens, and it marks Casshern Sins out as a thought-provoking cut above a lot of series, so don't be fooled into thinking that this show is all about robots knocking seven bells out of one another.

After the first half of the series elicited a heavy, world-weary sigh from me as I finished watching it, the twelve episodes which make up its second half managed to turn that exhalation into a more considered "hmmmmmm".  I really can't deny that Casshern Sins as a whole is tough-going to watch - in fact, I don't think I've ever watched an anime so bleak from beginning to end - but the show's bravery in depicting this outlook is beyond doubt and, ultimately, it works in delivering its thoughts and message in a suitably thought-provoking and discussion-worthy way.

This approach certainly isn't one that everyone will enjoy, and at times it borders on being an intellectual exercise rather than a work of entertainment, but it doesn't treat the viewer like an idiot and is unique enough to warrant viewing in my book.  It falls short of being a classic, but if you're looking for a break from anime norms than Casshern Sins delivers in dark, depressing yet satisfying fashion.

English and Japanese audio, English subtitles.  The only extras on show available over this three-disc release are textless opening and ending credits.

8
Its unique nature in terms of both story-telling and animation mark Casshern Sins out as a series to watch, and one that largely delivers on what it sets out to achieve.
COMMENT AND DISCUSS
blog comments powered by Disqus