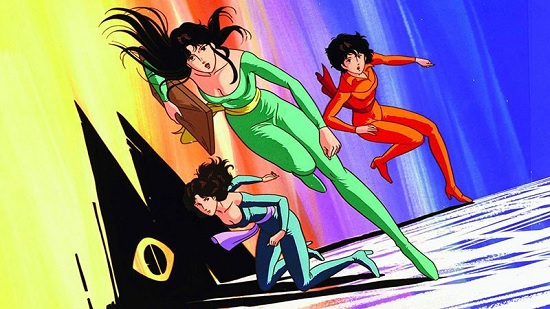 In my recent review for Dropkick on my Devil! I spent an inordinate amount of time trashing the terrible presentation of anime on Amazon Prime – even if the service offers good shows, Amazon’s shoddy curation makes them hard to find.  Nonetheless, I enjoyed Dropkick on my Devil! and judged that it was worth the extra effort needed to root through the disorganised listings to find it, so I resolved to be more productive with my underutilised Prime subscription and help UK Anime Network readers to find another – which is how I eventually scrolled down to see the gleam of Cat’s Eye reflected in my headlights.

Cat’s Eye is the anime adaptation of a Shonen Jump manga – of the Eighties! Cat’s Eye was originally published over 1981-1985 and was the title worked on by mangaka Tsukasa Hojo before he began his most famous series, City Hunter (which may only ever have had limited impact on the West but is a veritable institution in Japan, a massive multimedia franchise which has been going strong for decades), but Cat’s Eye was still a huge success in its own right, selling over eighteen million tankobons during its run. Cat’s Eye and City Hunter share the same setting and Cat’s Eye characters shared a nostalgic crossover for fans in the 2019 movie City Hunter: Shinjuku Private Eyes. Although this anime predates the City Hunter phenomenon and so there are no cameos to spot here (even if you can definitely envisage a design prototype for City Hunter’s hero Ryo in the hairstyle of Cat’s Eye detective Toshi), it still makes Cat’s Eye interesting as a source of historical insight for dedicated manga fans who follow Japan’s domestic market more closely. It’s also interesting for those who follow the idolising celebrity culture surrounding seiyuu voice actresses – if anyone who played the new Sakura Wars video game recently thought that the voice for the character Sumire sounded out of place that was because her seiyuu Michie Tomizawa was reprising a role that she hadn’t performed in seventeen years despite her voice changes since then – similarly, the same voice actresses for the young heroines that you listen to in the Cat’s Eye anime we’re looking at today were also hauled out of retirement thirty-five years later for Shinjuku Private Eyes!

It’s well-established then that Cat’s Eye is a significant show for anime aficionados, but what about the rest of us, is the show actually entertaining?

Cat’s Eye tells the tale of three sisters – cool Hitomi, motherly Rui, and spunky Ai – who run the “Cat’s Eye” café, the best place in town for all the sharpest modern blends for the most sophisticated palete. The café is across street from the police station – which is a very convenient location, because when you’re dodging the law the last place the police would look is right under their own noses. This is important because the three sisters also lead a double night-life as the thieving trio, also called “Cat’s Eye”. Hitomi, Rui, and Ai are cat burglars par excellence and make easy, playful sport of their heists – even though they pre-announce their targets with calling cards they still easily slip between the tightest security systems and spirit jewels and artwork right over the heads of the hapless and ineffectual police – not least because Hitomi’s boyfriend Toshi is a police detective and the loveable doofus invariably gabbles all their plans to Cat’s Eye, all the while being completely unaware of their secret identities and that he’s sharing the same coffee and going on dates with the very thieves that he’s supposed to catch!

There is honour among thieves – Cat’s Eye may steal, but they deny that they’re crooks. The girls’ father, a magnificent artist, disappeared mysteriously several years ago: after he vanished his collection was dispersed and all the paintings, sculptures and jewellery that Cat’s Eye purloin are his former works that the girls only want to bring back home. In so doing they hope that once his art is reassembled then clues to why he vanished that are hidden in the pictures can be deciphered. Invariably, this involves rescuing the art from the clutches of the mafioso that have acquired them as trophies of their corrupt rackets, or thwarting the competing heists of rival thieves who only want the art for their own selfish gain. Can Hitomi and her sisters thread the needle of both stitching together the map to their father’s whereabouts while surreptitiously helping Toshi catch the real criminals?

I’m honestly not sure if I can even say any more than that. I hesitate to even give this anime the usual rating – how can you score simple facts of history out of ten? It is what it is - Cat’s Eye is so Eighties that the anime’s ending sequences are literally aerobics videos! Analysing this anime is like trying to review Pac-Man!

It’s hard to credit that Cat’s Eye was once a Shonen Jump manga –  for the millennial generation who grew up with the Big Three of Naruto, Bleach and One Piece, and especially the iGen who today have My Hero Academia, Food Wars or Black Clover, Cat’s Eye really is a window into a completely different world. That turns out to be the bright gleam reflected in the cat’s eye of Cat’s Eye – its ability to play it straight. Glamorous gentlelady thieves – in sensual gymnasts’ costumes – pulling off flamboyant heists of fine art amidst criminals of quality? This ain’t exactly the sort of plot they run in The Wire. I haven’t seen anything remotely resembling this since 1999’s The Thomas Crown Affair over two decades ago, and that was already a remake of a film from the Sixties. These days, you simply couldn’t make a show like this honestly or straightforwardly, and it would be treated harshly as if it was a girl with faded looks hiding them under excessive make-up, showing up with caked-on layers of parody and irony – however Cat’s Eye lets you admire the tropes when they were still young and fresh and comely. Is Cat’s Eye dated? Sure, but to criticise it just for that feels as pointless and without perspective as complaining that The Adventures of Gigantor isn’t as flashy as Pacific Rim.

You do have to adjust your expectations when viewing – this is a cheap television anime from the early 1980s and so you’re not exactly going to find much in the way of sakuga here, to say the least. Frame rates can be choppy and there are plenty of animation errors and weird perspectives – one in an early episode stood out to me in particular was Hitomi kunoichi-leaping through the branches of trees – which, in a Japanese urban park, are apparently as tall as Californian redwoods. Nonetheless, while it’s true art may lack the slickness, smoothness and sophistication of modern digital production… you also get to enjoy the positive qualities of hand-drawn anime, such as lovely backgrounds or the charming watercolours of the mid-episode eyecatches.

This is also a show where a basic Amazon Prime subscription doesn’t skimp on the material. There are 73 episodes here to enjoy across two seasons, so you are getting plenty of bang for your buck. The art style changes for the second season and I really do think that it’s a downgrade compared to the first, departing from an imitation of Tsukasa Hojo’s more rounded art and becoming more angular and, oddly, giving characters really thick necks that often make their heads look too small for their bodies. Nonetheless, despite the inferior art the content remains the same underneath it. Of course, the story’s total cobblers as a serious crime drama – the triumphantly inept Toshi would have been sacked from the police halfway through episode one if this show was even remotely realistic (let alone noone finding it strange that the café has the same name as the criminals!), even before the sisters make their getaway on rollerskates. It’s also amazing that a single police precinct apparently has more art galleries and art museums in its catchment area than the rest of Japan combined - an absurdity the Chief even calls out in dialogue in a later episode - it must be the most cultured ward in Tokyo. There was also an amusing remark in Amazon’s blurb for episode eighteen – the girls are on a “routine” heist, which is a bit of a Freudian slip as to how episodically inconsequential and plotless the adventures actually are.

Actually, though, that’s no bad thing. Cat’s Eye is a show that’s easy to dip into and out of as you please – the relatively large episode count itself removes tensions, as you can just pick out an episode here and there at a whim like strawberries from the bowl without having to think too hard about its place in the sequence. This is a show where you can pull on your tube socks, put your feet up with a Cadbury’s Wildlife Bar and enjoy some classy crime.