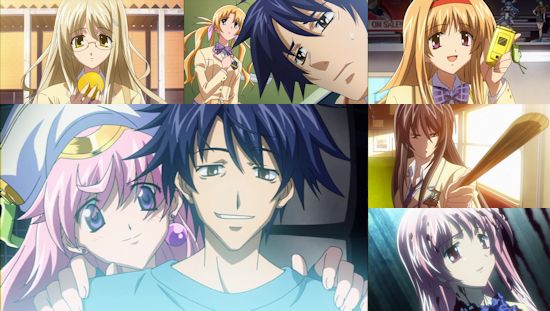 Given the hushed, reverent tones in which we speak of Steins;Gate in the UK Anime offices, it's with a mix of trepidation and excitement that I sat down to watch its predecessor as it reaches our shores on DVD - adapted from a 5pb visual novel just like its successor, and with the same rampant abuse of a semi-colon in its title, hopes were high that Madhouse's attempts to bring said game to the small screen could unlock at least some of the same emotions elicited over the course of our favourite anime of 2011.

Chaos;Head certainly begins in eye-catching fashion, dropping us into the midst of a devastated Tokyo while a sword-wielding "angel" looks set to take the life of a student with a mix of love and loathing in her eyes.  But is this reality, or simply a delusion?  Shifting back to a far more believable state of affairs we're properly introduced to our protagonist - Nishijou Takumi, better known as Taku to his friends and Takky to his make-believe anime character "girlfriend" Seira who lives with him in his mind.  If you haven't guessed by the presence of Seira in that description, Takumi is a hopeless otaku and a part-time shut-in who is always looking for an excuse to stay in the shipping container which is his home rather than heading off to school.

Truth be told, hiding away in his unusual abode doesn't seem like such a bad idea as a number of ever-more gruesome murders break out around Tokyo's Shibuya district, with these so-called "New Gen" crimes involving everything from mass suicides and crucifixion through to... well, you'll see if you watch the series.  No matter how much Takumi wants to ensure that he doesn't become caught up in these incidents, it seems that there's conspiracy at every turn looking to thrust him into their midst.  But is this really the case?  Given Takumi's propensity to veer into delusional visions that are so vivid that they're impossible to separate from reality, it's becoming increasingly hard to tell what is fact and what is fiction any more.

This brings us to the real "hook" of Chaos;Head - thanks to the presentation of its world effectively through the eyes of Takumi, we're left entirely unsure for most of the first half of the series where reality ends and delusion begins.  When Takumi is shocked to be approached by a girl who claims they've been friends for ages, is she lying or are we simply witnessing Takumi deluding himself?  Is another girl who sets out to befriend Takumi simply trying to be friendly, or is there something more malicious to her actions?  Trying to unpick the world of delusion and the fabric of the show's reality is an entertaining and sometimes gripping pastime that does a good job of carrying the series for much of its second half against a backdrop of murder, threat and conspiracy that seems to lurk around every corner - although what's to say that this isn't all the result of Takumi's over-active imagination too?

If the series were to continue in this vein then we might have had a genuinely fascinating series to discuss here, but sadly virtually all of this good work is undone entirely in the second half as our focus shifts away from the New Gen murders to a bigger and far broader story of conspiracy and an evil corporate entity hunting for power.  This shift in the balance of the story destabilises the plot of the series entirely, leaving it to stagger this way and that while dumping gobs of exposition everywhere like a drunk who has had a few tequilas too many.  At times this becomes almost laughable, as Takumi is forced to spout explanations of aspects of the show's science like a walking Wikipedia entry while characters around him go about their business for reasons that are never explained in a sufficiently substantial way all the way through to a unsatisfying ending.  In short, by the time the show draws towards its climax it's hard to actually care about what's going on, turning those early feelings of "just one more episode" into something more akin to "I can't wait until this is all over".

This isn't particularly helped by the show's production values, which (despite catchy opening and ending themes) always errs towards the side of feeling cheap - the animation quality is nothing to write home about in spite of some half-decent character designs.  That said, both Japanese and English voice acting casts do a decent job of handling the series, and although its first episode in particular struggles with subtitle timing (it's quite badly off, albeit not to the point of "breaking" the episode in terms of viewability) the overall quality of subtitling is good too.

If Chaos;Head were a game of football, it would very much be a "game of two halves" - its first six episodes offer up a fascinating concept that toys mercilessly with the viewer at times, and its sometimes gruesome murder-mystery thriller story seems to have the legs to carry it through.  This makes it all the more disappointing that the shift to a wider and more fantastical setting loses a lot of the tight story-telling and major hooks into its world, turning the previously cool concept of following a delusional character into a cheap, over-used gimmick that is frustrating more often than it is clever.  Still, it's not every day that you see phrases like "Dirac Sea" thrown about in an anime series, so if nothing else we have to at least nod towards Chaos;Head as being a brave but ultimately failed effort, and for fans of Steins;Gate it's interesting to see just how many lessons had been learned between this Madhouse outing and White Fox's adaptation of that visual novel.

English 5.1 and Japanese 2.0 audio with English subtitles.  The sole extras on this two-disc collection are text-free opening and ending credits.

6
After a promising start, this series loses its way majorly in its second half to make for an effort which is ultimately clumsy and disappointing.
COMMENT AND DISCUSS
blog comments powered by Disqus