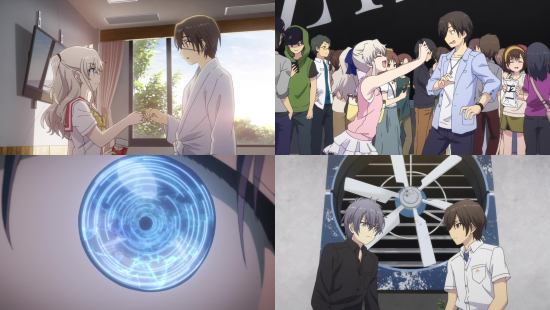 There is an ongoing theory within the scientific community that the source of life on Earth could be of extra-terrestrial origin: The necessary proteins for life may have hitched a ride on the back of a comet. The comet dust rained down upon Earth, seeding the primordial oceans to create the basic building blocks of life. It is also possible that viruses and other bacteria may have travelled to Earth on the back of a comet, there are theories that this is where the common cold came from. It is important to note that there is little or no proof of any of these theories, and that Wikipedia isn’t an authoritative source, but it doesn’t stop this theory from being used as a plot point within Charlotte.

The source of the superhuman powers manifesting themselves in teenagers has long confused scientists, and it’s a complete mystery why it only affects those of a certain age. However, when you start thinking of the emergence of powers as a virus, it begins to make a bit more sense. The reason why the powers vanish, is simply due to immunity. It makes sense! At least to someone who isn’t a biomedical scientist. The series continues it’s explanations, going so far to marry up the orbital period of the comet Charlotte with the emergence of witches in the 16th century, medieval saints, and priests. Someone actually thought about this! Though, they are relying on the unused 90% of the human brain trope, which has been thoroughly debunked.

I digress, as much as this bit of the back story is fascinating, the story has continued to move on towards it’s finale. Yuu, having grieved and mourned the loss of his sister Ayumi - after her latent powers manifested, killing her and destroying a part of her school - finds himself at a bit of a loose end. Something is not quite right, there is a constant feeling that something is missing in his life. Thankfully, Invisible Girl Nao has been helping him with his emotional anguish. Thanks to meeting the blind vocalist for ZHIEND, Yuu finds himself at peace… Until his memories return.

The partitioning of Charlotte into two halves makes sense. The second half is completely different in both the pacing and tone. Charlotte has grown darker as it has progressed (in the same way that Angel Beats did), and the true hardships faced by those with emergent powers becomes evident. Around the world children are locked up in facilities, subjected to experimentation, tortured and mistreated - all in the name of granting more power to the adults in charge of them. However, as grim as this sounds, a group including Yuu, his brother, and sister, have a plan to escape. You see, Yuu’s power isn’t as weird as it first seemed. Yes, he can possess someone for 5 seconds, but if that someone has a power, then he can plunder their abilities and keep them. For those who remember Syler from the TV show Heroes, Yuu can do the same thing (except without extracting parts of the brain and brutally murdering them).

Yuu’s ability makes him a potential saviour for all those children trapped around the world, and it becomes a race against time to free everyone and rid the world of the virus forever. It’s a noble cause, but will Yuu actually manage it without losing himself in the process?

Charlotte has changed quite a bit compared to the first half. The pacing of the story is a bit strange. While I like how the story concludes, the removal of key plot points has kind of spoiled things for me. It is hard to put into words, but the conclusion is both welcome and unsatisfying. As I do not wish to spoil anything for you, I shall stop here.

This release, although delayed, maintains the same quality as the previous part. I have dived into the English dub this time around and have been quite surprised how enjoyable it is. Especially Nao, whose actor has perfected her sarcasm and sense of revulsion. Yuu’s actor is still overly whiny, but this matches the actor’s style in the Japanese dub, so that’s not a problem.

This concluding part to Charlotte has changed the pace of the series completely, but at least it offers a proper story and conclusion. Though that may not be to everyone’s tastes.

7
An interesting conclusion to Charlotte.