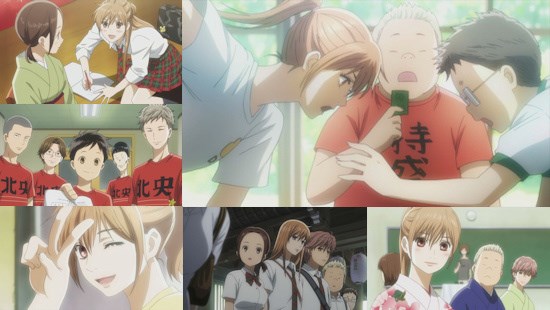 It's surprisingly rare to see a huge discrepancy between two reviewer's opinions of a series here at UK Anime, but Chihayafuru is one of those unusual moments where myself and my esteemed colleague Elliot simply didn't see eye to eye.  As a result, his thoughts on the opening episodes of the series didn't gel with my own thoughts on the show at all - then again, I really can't refute the core of any of his criticisms, so that alternate take on those initial episodes is well worth reading as another side of the critical coin to consider.

Certainly, if the idea of a series which revolves firmly around the decidedly Japanese game of karuta doesn't appeal to you, its prominence will continue to disappoint you throughout the remainder of Chihayafuru's first half.  As per those first few episodes, the broad centre of the show's story is the triangular relationship between Chihaya, Taichi and their now-distant mutual friend Arata.  With Chihaya having lost touch with the latter as expressed by the first few episodes, we find both her and Taichi embarking upon a surprise visit to Arata's new home in a reunion which proves to be far from friendly initially before the coldness in the relationship eventually thaws, giving Chihaya the kick she needs to redouble her karuta playing efforts.

From here, we switch to what you could call more typical high school anime fare, as Chihaya first drags Taichi into creating a school karuta club before going to work upon finding the other members required to make said club official, with each possible member getting an episode in which their character is fleshed out as their will to resist crumbles in the face of Chihaya's exuberance.  Once the club is recognised, it's time to train up the newcomers and look towards some major forthcoming karuta tournaments, with Chihaya's eye always seemingly trained more on the chance to meet and play karuta with Arata again over anything else.

While all of this sounds like a pretty typical mixture of a club-based anime and romance fare, it's the small things which make Chihayafuru stand out from the crowd despite the potential handicap of basing itself around a game which is tough for a non-Japanese person to really be drawn into.  Although some kudos has to be given to attempts to "spice up" scenes of karuta being played by ramping up the tension and raising the stakes quite nicely at times, the series really spreads its wings when it's away from the tatami.  For starters, the relationships between characters are perfectly played out throughout - in particular, Chihaya and Taichi's relationship is compelling in the way it sits on the knife-edge of romance and a more simple long-standing friendship, exacerbated by Chihaya's cluelessness about... well, anything much beyond the confines of her love for karuta.  While other, secondary characters don't get quite as much flesh to their bones, there's still enough to invoke some kind of emotion or sympathy towards them as they all have their own stories to tell, and their presence also brings out even more noteworthy characterisation in Taichi and Chihaya.

As I mentioned earlier, I really can't argue with the assertion that Chihayafuru tries, perhaps too hard at times, to angle everything through a rose-tinted view of karuta, but more important to me is the fact that despite this it does a simply wonderful job of shining a spotlight upon the human condition - the smart, diligent Taichi still has problems with both his parents and his struggle to get a handle on his feelings for Chihaya, who herself has family issues together with some flaws which threaten to undermine her organic genius at playing karuta.  Perhaps most impressive of all is Arata who, despite having relatively little screen time, proves to be more than just a sulky, angry teenager as we're exposed to a difficult to watch but brave picture of a family struggling to cope with a former bright spark of a grandfather as he succumbs to the ravages of dementia.

It's the human element that really makes Chihayafuru stand out - it's captivating, at times hugely emotional, and it's this ability to move the viewer's heart that in turns makes the karuta segments of the series work, leading us to care about the successes and failures, trials and tribulations in a way that we wouldn't were we simply presented with a series of clichéd, cardboard cut-out characters.  Its constant reliance upon karuta to power everything at the heart of its story is certainly likely to be a required taste (as is the case with any "sports" anime), but its as well-presented as you could hope for and sits atop a series that reaches its midway point packed to the brim with heart, compelling drama and great characters.

8
If you can get beyond its reliance on such an obscure game, Chihayafuru offers up some wonderful story-telling powered along by enjoyable characters.
LATEST REVIEWS