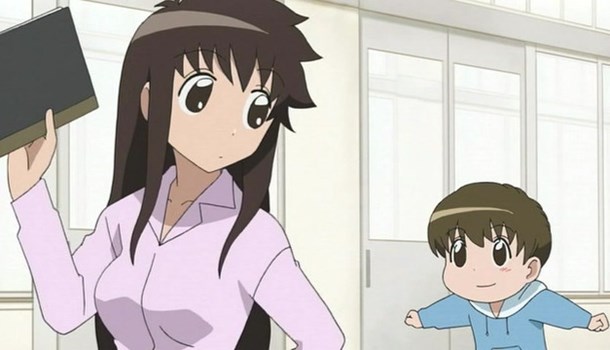 Another season, another three minute long gag show for me to watch! Again I hold out hope that another show will join Poyo Poyo and become a lovely little nugget of comedy that I can consume every week. Can Chitose Get You reach such dizzying heights? (Long story short, no.)

Chitose Get You concerns the titular Chitose Sakuraba, a ditzy eleven year old who has a one-sided crush on an inexplicably blue-haired office worker, who she dubs to be her “onii-chan”. Get used to hearing this term as it gets shouted multiple times per episode. Her rival in love is her mean schoolteacher, and some of Chitose's classmates also make an appearance now and again. The majority of the attempted humour in the show comes from Chitose proclaiming her love for her onii-chan and trying to stop anyone who would get in her way.

Chitose Get You falls flat right out of the gate due to one primary reason - timing. Each three minute episode has a grand total of one joke that it attempts to tell, and each time the joke is so drawn out that you can't help but feel that even with such a short running time the show is 75% padding. Some of this could be excused if the jokes being told had some decent payoff, but all of the gags are inane. The third episode in particular reaches magical heights of terrible as it pins its comedy on the fact that breasts exist, a gag that runs out of steam ten seconds into the show. The fourth episode did not seem to actually have a joke to tell at all.

The show also has a number of other failings that only become more apparent as you tap your toes waiting for the joke to be told. Most noticeably, the voice direction for the show is horrid, with many overly long pauses stuck into the script and even the creeping feeling that the actors are being asked to slow down their rate of pronunciation, which is torturous to listen to. It really feels like a waste of the time and talent of the voice actors. The art, made up of simple blocks of colour and washed out backgrounds, is very noticeably lacking any real animation, which makes the show look more like a slideshow or early Flash animation.

There is always a silver lining to every cloud, and in the case of Chitose Get You! it is the show's ending credit sequence, which is both surprisingly catchy musically and cute to watch. It's a shame it only lasts twenty seconds.

In conclusion, don't watch Chitose Get You. You could be doing so many other, better things with the time instead, like watching Poyo Poyo.

You can currently watch Chitose Get You in streaming form right here at UK Anime Network!

3
The inability to tell a joke kills this comedy dead.
LATEST REVIEWS