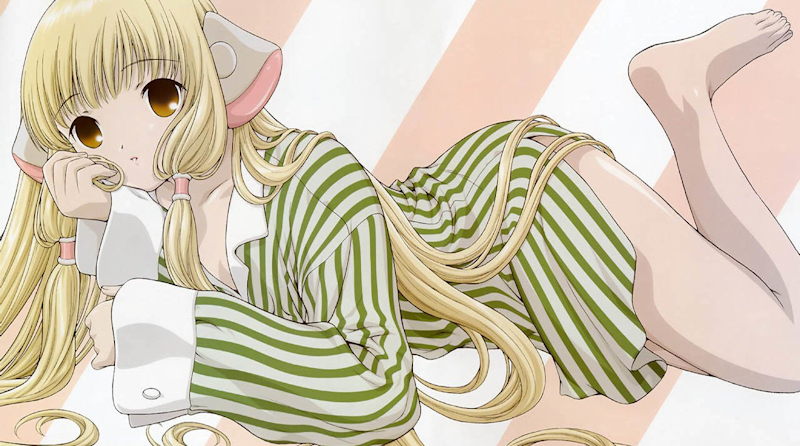 Part of MVM's bumper crop of new releases, a lot of people have been particuarly looking forward to Clamp's Chobits anime. I can't say I was one of them, but I'll try anything once ^_^

Chobits starts by introducing us to naive farmboy Hideki, who dreams of moving away from his bumpkin lifestyle and into the big city to pursue an education. He fails to get into University, so he decides to enroll in a prep college to help him achieve his goals. Arriving in Tokyo with little money and very few clues as to big city living, he's very much taken with the extravagant lifestyles of Japan's city folk. But the thing that impresses him the most is the abundance of "Persocoms", computers in the form of people. (It'd freak the hell out of me!) Unfortunately these cost big bucks Hideki just doesn't have, so its just as well he finds a mysterious custom model in the trash one evening. ^_^

And so Chobits begins, introducing us to Chi, a very cute Persocom with little in the way of witty banter - initially all she can say is Chi, although she soon learns other essential phrases such as "Underpants" and "Pervert"...

These first four episodes are bright, colourful and a nice introduction to a world where Persocoms are everywhere. There are minor differences from the manga, where less time is spent setting Hideki up as a country hick, but the majority of the show is much the same. The Persocom "on" switch is still between Chi's legs, Hideki is still an idiot and the girls in the series are every bit as compliant as their Persocom equivilants. My favourite episode of this batch sees Chi shopping on her own to buy some underpants, primarily because her zombie like gait as she walks through town repeating "underpants" reminded me of the traumatised Otaku who have seen Najica...

As far as Extras go, Chobits is pretty light - the usual textless opening and an "Art Gallery" of stills from the anime are all we find here.

As a male-oriented fantasy comedy, Chobits is everything you'd expect - all the stereotypes are there, it's incredibly cute and the humour is extremely direct. Clamp's style transfers wonderfully to the screen, but there isn't enough meat to the story for my tastes. Hopefully further episodes will expand a few of the themes (barely) hinted at in these first four episodes, but if you like anime with action and intrigue, you're shopping in the wrong isle.

7
Fun and lightweight, though promises of a deeper backstory could see this score highly with future releases.
COMMENT AND DISCUSS
blog comments powered by Disqus