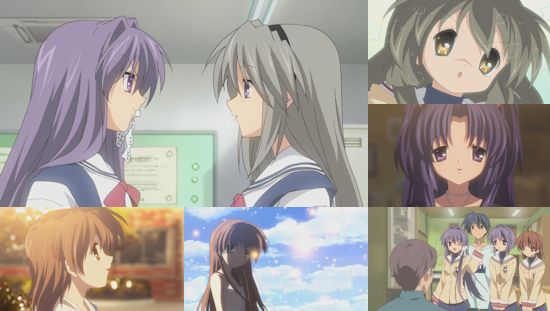 Having introduced its full cast of characters across its first half while delving deeper into some of those character's stories to boot, anyone who watched the first volume of this series is probably pretty well attuned to what the series does and does well - that is, delivering some hefty dollops of drama and soap opera alleviated by a surfeit of well-placed humour.

Once its arc featuring Kotomi is wrapped up in a forced but still admittedly tear-jerking fashion, the second half of the series continues to meander here and there while still rather smartly tightening up the real crux of its story behind the scenes - that being, the relationship between Tomoya and Nagisa, and the latter's attempts to resurrect the school drama club.

This brings us such joys as a basketball game organised by Sunohara to fight for the right to restart the drama club, a visit for said individual by his sister Mei, and Tomoyo's behaviour catching up with her as her grand plan for her own school life is revealed.  Ultimately though, we return to Nagisa's dream and her drive to create a play for the school festival - an endeavour which inadvertently dredges up some bad memories from the past for both herself and her parents.

Heavy-handed though it might be at times, Clannad certainly shows a keen eye for how to tug on an individual's heart strings throughout this second volume - several aspects of the series denouement (excluding its frivolous bonus episode) are truly moving and touching, and perhaps one of the best-realised moments in the entire series is where the real extent of Nagisa and Tomoya's relationship is revealed in a subtle but devastating (for some of the other girls circling around our protagonist, at least) way.  All of this occurs against a wider backdrop that is emotionally satisfying, espousing the importance not just of good family, but perhaps even more importantly good friends; a concept that it's hard not to get behind, ultimately.

Also provided alongside this climax to the first series is the Tomoyo After OVA, which posits and alternate look at the world of Clannad where Tomoya winds up dating Tomoyo - again, it's an emotional ride (and arguably a better one if your Tomoyo is "your type" of character) with a satisfying payoff, and makes for a neat little addition to the overall package.

It's visually where Clannad proves to be most breath-taking - its character designs are certainly an acquired taste, but the overall look and attention to detail provided by Kyoto Animation are stunning and of a consistently high quality with very few exceptions, to make for an experience which is hugely pleasing on the eye.  It's just a shame that we don't get to enjoy the series on Blu-Ray to allow the show to really shine in this regard, but this DVD transfer is still proficient enough and only some occasional grammatical flubs in the subtitles crop up to even threaten to spoil your enjoyment of things.

Alongside this, the series also provides a largely impressive soundtrack - quirky and whimsical in places, but powerful and grandiose when the situation requires it; a state of affairs similarly demonstrated by the show's opening and closing themes.  Personally speaking, I really couldn't get on with the English dub for the series at all - too many of the female characters sound blatantly like grown-up women trying to sound like girls (which they are of course) and simply didn't work for me - so this seems like a show best watched with its original language track in place.

Come the end of this first series (with After Story providing the home for the show's real emotional crux, as Ross mentioned in his review of part one), Clannad is a proficient take on Key's visual novel that encapsulates plenty of praiseworthy elements - Tomoya is a thoroughly enjoyable smart-alec protagonist with a heart of gold, and it's this which wonderfully drives the show's comedic elements before making way for some contrived but engaging emotional fare.  It's easy to sum up a romantic comedy with dramatic elements by suggesting that you'll laugh and you'll cry while watching it, but in Clannad's case it also happens to be entirely true.

English 5.1 and Japanese 2.0 audio with English subtitles.  Aside from featuring the "Tomoyo After" OVA episode, the sole extras here are text-free opening and ending credits.

7
It isn't the most subtle series when it comes to manipulating your emotions, but Clannad is an accomplished and beautifully presented melding of comedy and drama.
COMMENT AND DISCUSS
blog comments powered by Disqus