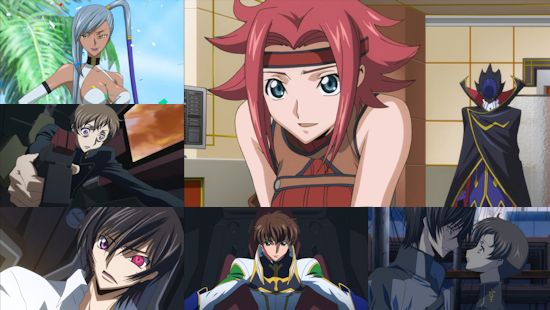 There are few cliff-hangers in anime more teasing, tantalising and tortuous than the final moments of Code Geass' first season - the good news with this Blu-Ray re-release of the show is that at least we don't have to wait for too long before following up on that cliff-hanger thanks to Kaze's expedient release of R2 in a shiny High Definition format (or DVD of course, if you still swing that way).

As this second season of Code Geass begins, we find ourselves thrust one year forward from the events of series one (the year 2018, if you're keeping track of such things) - given the climax of that first series, it's no surprise to learn that the Black Rebellion has failed and that Japan... sorry, Area 11... is once again well and truly back under Brittanian control.  In short, nothing has changed and a dictatorial status quo has returned to the lives of those within the country.

Perhaps more intriguing is Lelouch's position in the wake of this failed rebellion, as we find him going about his usual business as though nothing had ever happened.  What's more, in lieu of sister Nunnally he now seems to be in possession of a younger brother!  Clearly, something is seriously amiss with this picture, and it's an oddity that swiftly has the curtain pulled back upon it in R2's opening episode.

Once the occurrences of the intervening year as they pertain to Lelouch, Suzaku and the wider world are explained and put into place, Code Geass returns to what it does best, albeit with a far wider scope than the first season.  Thus, this means that the mantle of Zero is unleashed once again, with a view towards not just liberating Japan but seemingly to destroy Brittania and its Emperor utterly.

If liberating Japan in series one didn't seem like a tall enough order, this exponential increase in Lelouch's ambition also brings with it a whole new set of problems to face, from international politics through to the heart of the Geass "system" that has granted him his power but also threatens him at every turn.  All of this is without the personal demons which plague a host of the main characters, as previous events and the decisions that they have to make add a further frisson to this struggle which purports to be one of good against evil, but ultimately is far closer to a battle to prove who is simply "less evil".

Beyond its story, pretty much everything about Code Geass R2 is more grandiose than its predecessor - its focus on mecha action and battles is far more prevalent in particular, taking what was virtually window dressing in the first season and turning it into a core component here with an ever-increasing cycle of upgrades and more highly charged face-offs between the show's various factions.  The same can also be said for the show's core machinations - much like the first series, there are some delightful twists, reveals and notable moments to be found throughout R2, but at times these revelations are so camp or grandiose in their nature that they come close to being a little too crazy or hard to swallow.

In essence, this speaks to perhaps the biggest issue with Code Geass R2 - its very nature as a sequel.  With a beefed up animation budget and on the back of the hugely successful first series, this is a show that clearly feels that it has to one-up everything that came before to justify its existence.  It's a brave and even commendable goal, but it means that at times the series loses sight of what made it so fascinating and strikes out a little too far, which in turn reduces its potency.  The series also suffers a little from the simple need to create this second season - the first series clearly had to manoeuvre itself into a position for R2 to exist, which in turn means that it takes a while for the second season to align itself and get its proverbial ducks in row.

Thankfully, once it does this Code Geass R2 is another wonderful rollercoaster ride - a macabre and ever-changing dance between good and evil, ally and enemy that will keep you hooked even at its most theatrically nonsensical heights.  Is it as good as the first series?  No, it isn't, but that doesn't stop it being a fantastically entertaining show, and one to be marvelled at for pulling everything it attempts off as successfully as it does.

With that out of the way, what of this Blu-Ray release of R2 for existing owners of Beez Entertainment's release of the show?  Let's start with the bad news - this release has absolutely no extras, where even Kaze's DVD release at least offers up text-free credits and image galleries.  While the reason for this seems logical enough (that being a simple lack of space, with the whole show crammed into two BD-50 discs), it still really isn't acceptable to see buyers shelling out extra for a High Definition release being offered less content than their DVD counterparts, and beyond even that we wish that the audio commentaries from Beez's release had been included here as they were with season one.

Putting that aside, the better news is that Code Geass R2 looks great on Blu-Ray - in spite of squeezing an entire half season onto each disc the overall picture quality is a definite step-up from the DVDs and is very pleasing on the eye throughout even if it isn't the best looking HD transfer you'll ever see.  Oh, and before you ask, we should probably mention that yes, this release does include the image cut at the BBFC's request from the show's previous UK DVD outing.  All subtitles are present and correct with minimal errors, and the English dub is in place and perfectly adequate, albeit with a less energetic delivery than it perhaps deserves.

To summarise then, if you loved the first season of Code Geass then this second series is an absolute must buy - it might over-reach in places or shift focus away from its primary points of interest at times, but even if it can't quite match its predecessor it's still incredibly engaging to watch and a ceaselessly enjoyable experience from beginning to end.  Those who already own Beez Entertainment's previous DVD release will (quite rightly) feel sore at the lack of extras on this edition, but if those bonus materials don't interest you and visual quality is your goal then Kaze's offering certainly does the job nicely.

English and Japanese stereo audio with English subtitles.  While this Blu-Ray release has no extras, the DVD release contains text-free opening and ending credits and a number of image galleries across its discs.

8
It might not quite hold the magic of its predecessor, but there are few proverbial rollercoaster rides that are as darkly and deeply enjoyable as this second season of Code Geass.
COMMENT AND DISCUSS
blog comments powered by Disqus