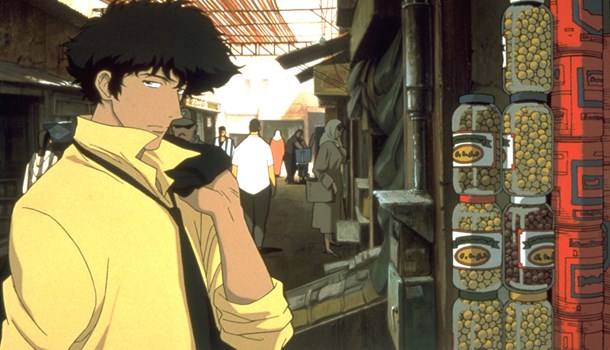 While it may be getting a bit long in the tooth - it’s almost twenty years old at this point - we are big fans of Cowboy Bebop here at UK Anime towers, with our former Editor-in-Chief gaving the series “collector’s” re-release from Anime Limited a whopping 9/10 back in 2013 (was it really that long ago?). The series had been in something of a licensing limbo after the demise of Beez Entertainment. Therefore the rescue by Anime Limited - with their very first release - was very welcome indeed. However, Cowboy Bebop: The Movie had not been so lucky. Originally released back in 2003, by Sony Pictures Home Entertainment, the movie had been stuck in an even longer limbo than the series itself. Thankfully no more, as the Cowboy Bebop: The Movie is finally getting the High Definition re-release it deserves, courtesy of Manga Entertainment’s DVD/Blu-ray Double Play.

For the uninitiated Cowboy Bebop follows the residents of the titular spaceship "Bebop", who are all independent - yet strangely co-dependent - bounty hunters. They seek to earn their fortune as ‘cowboys’ (registered bounty hunters) in a gritty space-age future, by flitting around the galaxy picking up various criminals and collecting the rewards for doing so. Viewers of the series will no doubt recall that this often doesn’t go quite to plan…

Spike Spiegel is without doubt the main character of the piece, an effortlessly cool antihero who somehow always manages to end-up doing the right thing. Much to the chagrin of his femme fatale crew-mate Faye, who would have everyone believe she’s just in it for the money - despite housing a softer side herself. The straight man of the group is ship’s captain Jet Black, a former Intra Solar System Police (ISSP) officer with a strong moral compass. Next up is elite hacker - and androgynous goofball - Ed, who provided much of the series’ comic relief. Finally there’s Ed’s best friend, and super smart Corgi, Ein.

With such a range of colourful characters introduced by the series it would be easy to dismiss Cowboy Bebop: The Movie as one for existing fans only. It is a common problem for anime series tie-in movies, which often either alienate any but the existing fans or repeat so much information as to put off the veterans. However, this movie performs such a sterling job introducing it’s characters, and building it’s world, that not having seen the series is in no way an impediment to enjoying the film. And it does so in such a beautifully effortless way that it is no hardship for existing fans to be re-introduced. There are - of course - some nods to viewers of the series, which add to the overall experience, but these are in no way an essential part of the film.

Set some time between episode 22 and episode 23 of the series, Cowboy Bebop: The Movie introduces a range of interesting new characters. The main ones coming in the form of the morally ambiguous antagonist of the piece Vincent Volaju; detached, desensitised, and classic game obsessed, hacker Lee Sampson; and Elektra Ovilo, a security agent at Cherious Medical. Vincent is ultimately the most interesting character (though it takes a while to flesh him out), and something of a mirror to Spike - similar in approach yet falling on opposite sides of right and wrong.

The plot itself could be considered a little lightweight, even trite, by today’s standards. Dealing with a biological terrorist threat, which ultimately turns out to be something a little different involving coverups and secret experiments. Nevertheless it is extremely well executed, with director Shinichirō Watanabe managing to eke out an incredibly dynamic live-action feel throughout the movie. It was always a beautifully animated movie, and the animation still holds up well all these years later. If anything the movie looks better now that it ever has before, as it really benefits from the jump to high definition. The opening sequence alone is spectacular, from Spike’s convenience store brawl through to the black and white opening credits, it oozes cool and effortlessly sets the standard for the rest of the movie.

The soundtrack follows the same themes as the series, yet it stands out on its own incredibly well. It features the usual strong Jazz influences, but is this time aided by some new Moroccan styling thrown into the mix. Composed by Yoko Kanno, and performed by her band Seatbelts, it is exceptional even by their high standards. It would not be a stretch to call the soundtrack a masterpiece, one which I am listening to as I write this.

Our only real complaints are regarding the release itself: Perhaps this was an issue with our check discs, but the film defaults to Japanese audio without subtitles - with no audio options in the menu. Meaning you have to be very familiar with your player’s settings to make the switch to either the (excellent) English dub, or to activate the subtitles.

Minor annoyances aside, it’s great to finally have Cowboy Bebop: The Movie available again, and in high definition. Whether taken in as part of the series or enjoyed as a stand alone film, it is a masterclass in how to approach anime series tie-in movies. Watanabe makes sure that there is something for both Cowboy Bebop veterans and newcomers alike. Cowboy Bebop: The Movie may just be the best anime series tie-in movie of all time.

Behind the Scenes, Storyboard Comparisons, Conceptual Art Galleries and the Theatrical Trailer.