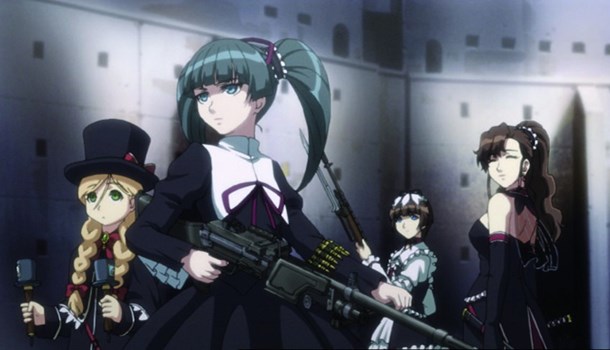 Much like MVM's Gun Sword, Coyote Ragtime Show seems to have been pieced together by raiding the best bits of other shows, and like Gun Sword... it works!

Set in the future, the story revolves around the biggest bank heist ever undertaken, several years before our story begins. The mysterious criminal mastermind, Mister, wants to get his hands on the hidden loot, but doing so requires a daring prison raid and a race against time - the planet where the cash is located is due to be destroyed in 7 days time!

Naturally Mister isn't the only criminal after the bounty, and whilst ace detective Angelica Burns, aided by the cute but dim Chelsea try to stop him, they also have to contend with Marciano's 12 SISTERs, a group of robot femme fatales controlled by the criminal underworld - in the best traditions of Lupin and Cowboy Bebop, this is a criminal caper of some imagination and superb direction.

The characters are all likable - Mister's rogueish charm and his team of criminals are all distinctive and make for (anti) heroic leads, whilst Angelica's determined gumshoe is always good value whenever she's on screen. Fanboys can rejoice with inclusion of the 12 SISTERs - gothic-lolita weapon-toting babes are always fun to watch, and the violence that inevitably ensues when they're on-screen is very brutal and very stylish.

Of course, if you like the girl next door type, there's always Franca, daughter of Pirate King Bruce, the man who stole all that money all those years ago - handily she's in the care of Mister, but she's no fool - cross her and she'll give you a damn good kicking, neatly avoiding the cute/helpless stereotype.

In fact, all the characters are extremely watchable, which allows you to effortlessly get involved in the Ragtime universe - with double-crosses, side-switching and a genuinely explosive finale, action fans could ask for little more.

The pace is extremely fast and there isn't a dull episode in the set. At only 3 volumes, the series is a short, sharp slice of action that you'll likely return to thanks to a wealth of great scenes (even the opening episode is high on thrills). In fact, think I'll go watch it again...