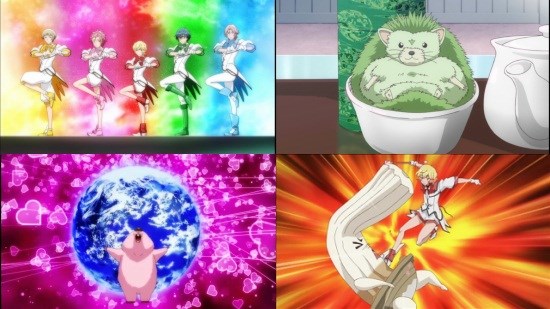 The magical girl genre’s been in a bit of a slump lately. PreCure has become a pretty soulless machine to sell toys, Yuki Yuna’s heart was in the right place but its pacing wasn’t and Sailor Moon Crystal has mostly just served as an example of how not to do it. So with the girls floundering is the world ready for a magical boy show? Well, Cute High Earth Defence Club Love is here to find out!

All boys' school Binan High is a pretty normal school (as far as anime goes anyway), with only its monthly pretty boy contest flagging that there might be something a bit different about the place. It’s in this peaceful environment that five young boys – animal loving Yumoto, lethargic En, money-obsessed Io, pretty boy Ryu and the mostly normal Atsushi – are about to follow in the footsteps of all magical heroes and start obeying the voice of a talking animal. In this case said mascot takes the form of a bright pink wombat who’s able to get around more or less unnoticed by controlling the corpse of a ‘temporarily’ dead teacher. The boys must now fight to keep the spirit of love going strong in their school against the machinations of the evil school council, who have a nasty habit of turning others into a series of bizarre monsters. To do so the five boys must "love making" into Battle Lovers and subdue the creatures with their long hard love sticks before a refreshing Love Shower restores them to normal.

Oh, and I’m not joking at all during any part of that last sentence...

Cute High Earth Defence Club Love is a series that has the potential to be a bit of a breakout hit if it plays its cards right. The series is undeniably hilarious as the characters take everything around them seriously, and sexual innuendo flies around so much that it’s impossible to keep a straight face. The pains that Wombat must go through to try and avoid being cuddled by Yumoto are fantastically funny too! What might hold it back though is that three episodes in there’s little evidence of a plot other than the bog standard "bad guys make monster of the week" fare that’s typical of the genre. It’s also an issue that the characters are all pretty one-note, sticking closely to their sole character attribute. It’s the sort of combination that could see the series go from a hilarious start to being pretty ordinary very quickly. In addition to this, there is the question of just how deeply this is going to end-up going down the boys-love path. There’s already plenty of fan-service floating around and episode three is essentially the gang trying to win a male beauty pageant voted for exclusively by other men. It’s a tricky line to walk if the series wants to keep as wide an audience as possible, though there are certainly fans around who’ll happily pick-up another pretty-boy series to fill the void left by Free.

Visually the show almost looks like they were making a series of Pretty Cure and changed their minds half-way through, as the "Battle Lover" costumes have a distinct, dress-like feel to them and the monster design is very reminiscent of that of PreCure. It’s probable though that this is all intentional, as the series is clearly intended to spoof as much of the genre as possible. Visually things look pretty good, at least until you get to the third episode and start realising just how much reused animation is going to be employed anyway...

Three episodes in, it’s still a little unclear just what the series intends itself to be beyond just being a spoof of the genre, but based on this start it looks like there should be enough here to keep you coming back on the merits of the comedy alone. Not to mention the fact that the ultimate enemy of love in the world is an adorable evil green hedgehog - if that’s not enough to make you watch then I don’t know what is!

7
These pretty boys will have you laughing the night away.