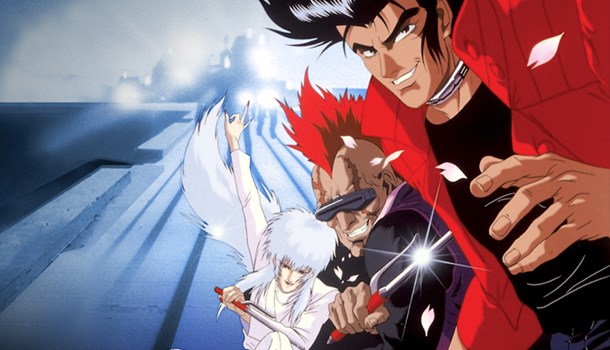 Cyber City Oedo 808 may not have been the first anime I ever saw, but it’s the first one I ever remember seeing that was sold as a Japanese anime - yes, I watched The Mysterious Cities of Gold on TV as a kid, and who knows what else, but that was  always shown as animation not as anime. Cyber City Oedo 808 was a natural for me to watch I suppose, being a lover of William Gibson’s cyberpunk sprawl trilogy and about the time of embracing Tsakamoto’s Tetsuo: The Iron Man and even more so Tetsuo II: Body Hammer (the memory is all a bit woolly, y’know). And a bit like watching Tsakaomto’s films when you were not old enough, watching anime then felt like an illicit pleasure.

Even before rewatching Cyber City Oedo 808 twenty five years later, I could remember parts of it, or at least believed I did. That androgynous lead character that isn’t a woman but a man (that really confused me back in the day, not used to the style of character design); a scene in a proper cyberpunky car-trailer-thing; three protagonists; three episodes; that weapon with the string that magically cuts through everything but you can also climb with (again, that one did the noggin in). Check. All remembered. Other elements I misremembered. I could have sworn the ending was totally different.

So back in the day did I enjoy it? Know what, I have no idea. But the OVA stayed with me so when I saw Anime Ltd were issuing a blu-ray I knew I had to see it again.

A three part OVA by Yoshiaki Kawajiri, responsible for the recently re-released Wicked City and Demon City Shinjuku (oh and a certain Ninja Scroll), Cyber City Oedo 808 follows three ex-criminals: Sengoku, Goggles and Benten, who accept release from prison to work for the Cyber Police, and why not? It’s better than the boredom of prison; and if that was not incentive enough, each case they break they get a few years off their life sentences. The catch? Most of their jobs are against the clock and if it runs out that collar of theirs might just blow their heads off.

Win some, lose some.

Having been released between 1990-1 it’s hard to say if Cyber City Oedo 808 was influenced by the manga of Ghost in the Shell, having been released a year earlier. Certainly watching Cyber City Oedo 808 you are constantly reminded of GitS, and it feels like it lives in the shadow of Shirow's classic, even if Oshii’s film came later. It is perhaps an unfair comparison, but rewatching Cyber City Oedo 808 I kept thinking of GitS and William Gibson’s writing, and not in Cyber City Oedo 808’s favour. If there’s a problem perhaps it’s the way in which GitS and Gibson can thrill you but also provide something more meaningful; a comment upon the nature of reality, to probe what it means to be human, to acutely perceive where technology may go and other philisophical ideas. It’s true that Cyber City Oedo 808, despite its age, provides a visually seductive dystopic society and one in which (in true cyberpunk style) most of the heroes seem worse than the villains. The design of the city and the flying cars owe a great deal visually to Blade Runner, as Blade Runner itself owes a debt to Fritz Lang's Metropolis.

That said, for a thirty year old OVA the animation by Madhouse scrubs up pretty well. There are some odd design issues – the woman with the suit that includes just one trouser leg (that’s sci-fi for you) – but it’s clear that plenty of time and money have gone into the animation. No penny pinching still-images to round out the running time present themselves in an obvious way, so despite its age the animation still has a pleasant smoothness, even if not top-end by today’s standards. And there’s something about the brash colour palate of animation at the time that I find unusually compelling. Unlike watching the more recent ID: Invaded, which is sharp of contrast and subtler of colour, something about the glossy colour palate of Cyber City Oedo 808 is attractive. Screens absolutely should glow blood red as they shout: “Kill you” in my opinion.

I find myself imagining that the excesses of the 80s are reflected in the design of the clothes and especially the androgynous Benten’s big hair (based on our very own David Bowie no less) just as it is his bright red lips and nails. It also creeps into the robot attack dogs with lasers in their mouths - somehow that feels very eighties to me, the idea that throwing escalating amounts of money at something and all you can come up with is a mechanical version of an existing thing but with added lasers, but maybe that's just me.

When it gets down to character again I find myself getting hits of GitS, though it is never a one to one correlation. Either way, our protagonists though defined: Sengoku the bad boy, Goggles the hacker, Benten the aethlete, exist like the colours in the series: as broad brush strokes. Don’t expect any of the sophistication of the Kusanagi – Batou relationship, if only because unsurprisingly each episode focuses on one of the characters. Though each episode may delve somewhat into a single character we don’t learn much about them and the dynamics between the three are almost non-existent. Then again it’s not looking to be a great character study and each story is interesting enough in and of itself, even if they tend to feel like those types of stories that would be used as filler stories in GitS SAC (First or Second Gig, take your pick). Stories wherein old men try to remain young and the dead integrating with technology to take revenge feel quite common now, yet contextually Gibson happily brought The Finn back to life as a cyberspace construct only 2 or 3 years earlier in Mona Lisa Overdrive, but even then, Gibson looked beyond something as base as revenge, instead, seeing the possibility of taking existence outside the physical, similar to GitS and of course Cronenberg years before in Videodrome.

Similarly many of the stories presented to us follow patterns we are used to now, but thinking back to when I first saw Oedo 808, they weren't tropes at the time. It’s like watching silent films and seeing clichés galore until you stop to think, no these films created the things that we now take for cliché, as they were creating their own language, here Cyber City Oedo 808 is creating stories that even by the time of GitS SAC we’d take for granted. More importantly though the stories are never boring; even if they may be reasonably predictable they are never just a grind. There’s something almost comfortable watching them. Even the bloody violence that explodes from time to time has a pleasant comfiness to it and oddly it's not as violent as, say, some of the bloodiness of Cells at Work (admittedly based on the first few episodes). Also, thankfully, Cyber City Oedo 808 lacks some of the latent misogyny I felt was present when rewatching Wicked City.

Arguably the most iconic thing about the original UK Manga release was the hilariously over-the-top dub, replete with very inventive swearing and a blistering, UK-only soundtrack by Rory McFarlane. This unique blend of memorable music and juvenile scripting is available on this release, and it's a nostalgic kick for those of us who fondly watched the show on Channel 4 or purchased the VHS. For us, it's what we remember, even if it'll probably seem pretty odd to our US and Japanese peers. Watching it as intended is a very different, more mature experience with distinctly less cheese, but at least we have every option open to us at long last.

Releasing Cyber City Oedo 808 feels a bit like nostalgia and a bit like delving into history even if it’s not really that old. And I for one am very happy to see it back on the shelves, because I think looking beyond the smoothness of glossy animation can reveal rough gems. Cyber City Oedo 808 has a bit of a rough gem feel to it - even a cult gem feel to it. I’m not convinced it deserves to be considered a classic, it doesn’t do enough but it’s more than just a release due to allow an anime fan of a certain age to indulge in a little nostalgia. For all that the OVA doesn’t really have a focus to it: it is three stories, three forty minute entertainments, yet it still beats many longer stories. Perhaps the shortness of it all helps makes it, any more may not have held up, the characters may not have had the legs but three forty minute episodes just hit the spot. Maybe this is something modern storytellers can learn from, sometimes less really is more.

7
Not quite a classic of the genre, but still violent, glossy fun
LATEST REVIEWS