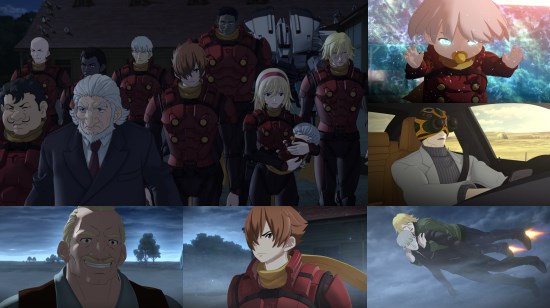 Whether Kenji Kamiyama's first foray into the long-running world of Cyborg 009 was a successful one is open to debate - if nothing else, 009 Re:Cyborg was an ambitious attempt to take on Shotaro Ishinomori's original manga in a manner befitting of the franchise to try and bring to an end a story never completed by the original author itself.

Last year saw the director return to Cyborg 009 with a trio of movies under the subtitle of Call of Justice, serving as chief director while Psycho-Pass movie's unit director Koudai Kakimoto served as outright director. Now, these three films have been broken down into a full twelve-episode series to be streamed as a "Netflix original" - is the result worthy of the Cyborg 009 name?

The series takes place some years after the events of 009 Re:Cyborg, with the world now seemingly safe from any major threats and its cyborg saviours now enjoying their retirement out in the Texan wilderness. Of course, a series following nine former heroes mooching around the house wouldn't be much cop, so in no time at all the gang are pressed into action. This time around, their enemy seems more threatening than ever before - "The Blessed", as they are known, are members of a practically immortal tribe of superhumans who have worked their way into the higher echelons of every organisation on the planet and are now ready to unleash a malevolent plan to bring about a new world order of which they will be masters. With even the United Nations seemingly not to be trusted, our heroes will have to risk being framed as villains if they're to spring back into action and save the day.

Much like 009 Re:Cyborg, Call of Justice is a fully 3D CG animated affair. Unlike 009 Re:Cyborg however, this series looks utterly outdated and terrible. While Sanzigen's work on that previous film provided some impressive set pieces and an aesthetic that was at least respectable if not mostly pleasing, Signal MD and OLM Digital Inc's work here feels like it should belong to the PlayStation 2 era and is more redolent of Reboot than a CG anime befitting of 2017. Character animation in particular is atrocious (particularly unfortunate for a series where there's a lot of running going on), and the settings that the series takes in are all both utterly generic and unimaginative. The show's character designs aren't at all bad, but that doesn't help them much once they're set in motion and start traipsing around, grinning like creepy mannequins or ragdolling awkwardly. How anybody could look at this series and feel like its visuals were acceptable - particularly given its origins as a theatrical anime - is beyond me.

Perhaps we could sidestep the show's visual issues if its story stood out and grabbed up, but it really doesn't. Especially when set against the sometimes heady fare of 009 Re:Cyborg, Call of Justice feels like its targeted towards a younger age group - its tale of superhumans and their plot to overthrow the world is simplistic and predictable, and it plays out in a way which does nothing to circumvent the feeling that you've seen it all before and handled much better to boot. There are a few moments late in the series that provide flashes of the kind of more thoughtful fare you'd expect from a Kamiyama production, but they're only fleeting and far too little too late. Ultimately, you could probably write all of the bullet points of how the series progresses at the end of episode one and find that you called every single one of them right by the end of the finale. Even with its predictable starting point there's surely a far more thrilling rollercoaster ride that could be built around the premise at hand, and the lightweight handling of both story and characters throughout Call of Justice is perhaps its greatest disappointment.

It probably says it all that there's little more to be said about the series beyond these criticism - there are no bright moments to highlight or fascinating ideas buried in the broader malaise of the show. The whole thing feels like it was knocked out quickly on a Friday afternoon - a sensation which is only further accentuated by those low budget visuals.

As part of their localisation treatment, Netflix have not only delivered a solid, error-free set of subtitles but also an equally solid English dub which does as good a job as you could hope for the show - kudos to Bang Zoom Entertainment for their efforts there. While we're in a positive mood, then show's opening and closing themes are both incredibly catchy, even if they fit the content of the series they book-end like a pair of smart trousers fits a dog.

Overall though, Call of Justice is a really frustrating experience - a Netflix-funded Cyborg 009 series should have been an exciting event that builds on the positives of 009 Re:Cyborg while circumventing its flaws. That certainly isn't what we have here, as this series is a cheap-looking, low-rent affair that has nothing to offer either newcomers to the franchise or die-hard fans of its world. Its simplistic story and looks to match may find favour with a younger audience, but for most this series will be nothing more than a major disappointment, even as a show which reveals the true nature of Margaret Thatcher as one of its early reveals.

You can watch Cyborg 009: Call of Justice on Netflix UK.

4
Atrocious 3D CG animation is a disappointingly appropriate accompaniment to a lightweight and predictable story. This is far from what Cyborg 009 fans deserve.
LATEST REVIEWS