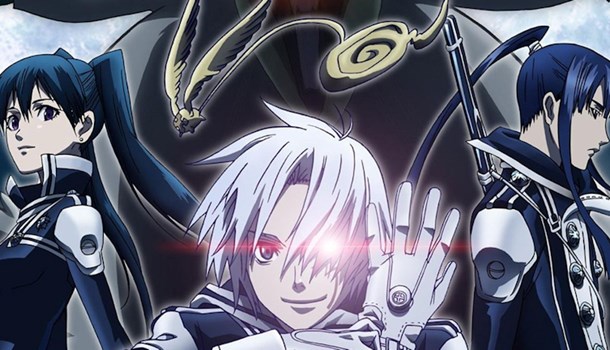 D.Gray-Man is a series we've been talking about at UKA for quite a while now - We’re up to about volume fifteen of the original manga and for the most part we’ve been quite enjoying it. The anime adaptation has finally landed on UK shores, but does it hold up to other shonen shows like Bleach and Naruto?

It is the fictitious 19th Century, and exorcist Allen Walker is making his way to the HQ of the mysterious Black Order to join the fight against the Millennium Earl and his army of demons called Akuma. Allen is a special type of exorcist with a cursed eye, and his arm is bound with a substance known as Innocence. Using his powers, his only desire is to stop the Earl and collect all the remaining Innocence in the world so that it can be used against his enemy.

This first set of DVD's contain a good chunk of opening for the series, introducing the viewer to quite a large selection of characters from both sides of the conflict. Allen himself is, on one hand, quite a refreshing take on the typical shonen hero - he isn’t overly cocky like our good friend Naruto, or overly confident in the way that Ichigo from Bleach tends to be. He knows his abilities, but doesn’t use them to show off and is always looking for ways to improve himself, which makes him far easier to like than either of the other series leads we've mentioned.

On the flip side, this also means that Allen doesn’t really have much in the way of personal growth. He is focused on his job, but will always make time for his friends, which while different, isn’t interesting over a long period of time.

The first set of exorcists themselves aren’t much better either unfortunately, managing to cover each shonen stereotype. Lenalee is the typical female influence - cute, good-natured and sporting a pair of Innocence powered boots, she's the girl next door type whose primary role is to break up the otherwise male-heavy dynamic. Kanda is the typical broody swordsman that requires some warming up to, while others that appear later on fill in the slacker and neurotic roles nicely.

No, I'm afraid it's left to the bad guys to make things interesting. The Millennium Earl himself has to be one of the greatest bad guys in recent anime - a character that portrays a sense of cuddly, almost harmless fun, but at the snap of the fingers can quickly show his dark side, which, thanks to some gleeful scenery chewing by the voice actor, is very enjoyable. His right-hand girl, Road Kamelot, has a cute evil charm that just helps to mix things up and keep the viewer on their toes. Later additions, such as the easy-going Tykki Mikk, are far more interesting than our stoic heroes.

While the main group of protagonists are nothing overly special, it's the story arcs themselves that, while meaty with an exciting storyline, are not drawn out with overly long fights or pointless monologues, which are staple filler for this kind of show. With D-Gray Man, you get two substantial arcs, which never lose their pace and for once don’t end on a cliff-hanger which invokes the usual irritant of a long wait for the conclusion.

If there is one major criticism to level at D.Gray-Man it's that you get a feeling that you haven’t really experienced anything that moves you. While the stories and the character combinations themselves are entertaining, there doesn’t really seem to be any underlying message beyond defeating the bad guys before they defeat the good guys. There is a little snippet looking at people letting go after the death of someone close to you, but this is used more as a vehicle to explain the Akuma and is only touched upon briefly in later episodes... something that some might say is a missed opportunity.

Compared to the other examples of the action series genre, D.Gray-Man does manage to make itself stand out with a unique setting, a varied if stereotypical cast and a couple of strong storylines. The show is highly entertaining and you get a lot for your money.

D-Gray Man will appeal to action fans, but for those looking for a series with some brains behind the fights, you might want to start here.

Some less than steller extras in the form of audio commentary on episode two and the usual textless opening and closing.